Back to the Erewash canal for Blacking the Hull

Mick and John at Kingfisher Boats are putting on the second coat of bitumastic today, then leaving the hull to dry for 48 hours over the weekend. We visited Annie to admire her hull. John's knee seems better after his op, if a little stiff. Jobs to do include servicing the diesel and cleaning off rust around the engine compartment, when John is able to. It will be nice to see more of our friends at home, now we are back. 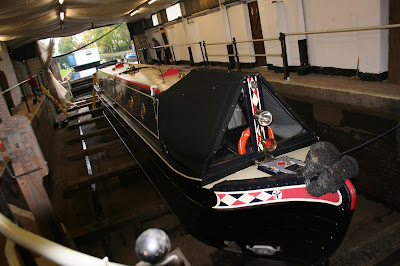 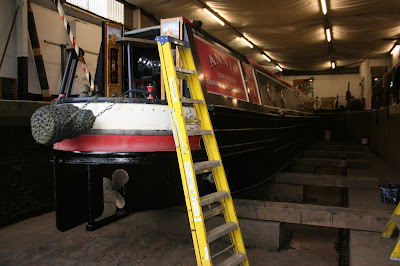 So we are here! Annie is moored up at Kingfisher, for which we are very grateful. As Newark town Lock is closed from 19/10 to about 14/12, we would be unable to get back to our home mooring at Clayworth. We will enquire if there is a brief window when we can pass through Newark, of course ...

Now back to reality! Fitting a dutch airer at Sarah's and celebrating her birthday; fitting bathroom cabinet and new loo plus washing machine plumbing for Rachel; and doing some of our own jobs, too, before John's arthroscopy operation on Tuesday.


Liana joined at Sileby Mill (with a decent little chandlery shop) for the trip to Redhill Marina, where she walked to Parkway to get a train back to Sileby Mill, then joined John at Trent Lock later. Barrow on Soar is a lovely scene as you pass through the watermeadows, contrasting with the caravan park at the lock to the north. Pillings Lock was closed, but with a paddle open at top and bottom, as it is really a flood lock.
Reaching Loughborough, John moored Annie in the basin, after which we both visited the large, thriving street market. Remarkably, we met Ian Sharpe, recently retired, who lived in Market Rasen twenty years ago. It's good to know his family are doing well. Setting off, we were asked to wait for a narrowboat by CRT workers, so did so. Yvonne and husband David Pullen on NB Rhoda Ellen accompanied us all the way to Trent Lock, making for an enjoyable trip as we chatted. There happen to be many similarities and common experiences, as they live at Scothern, near us, are Christians at the church my ancestors are buried at, and have similar interests. Aren't canals wonderful! They moored on the wall before Cranfleet Cut, then David kindly helped John lock up onto the Erewash. Later on, after liana arrived, the four of us met up for a drink at the Steamboat pub. A good time was had!

As Annie set off, John and Maureen on NB Cor Blimey! (They said they weren't Pearly King and Queen when John asked!) asked to accompany him. The Mountsorrel area is very pretty. 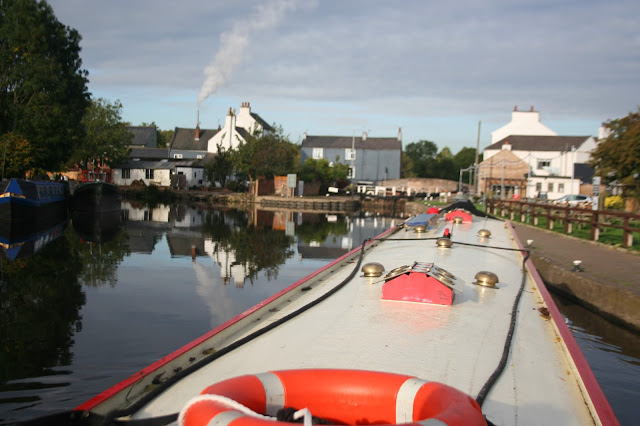 What a team! John made sure he helped with gates and paddles, and the two boats made great progress all the way to their base at Sileby Mill, where John moored for the night and watched .... rugby.


After night rain, John had a windy but fair start to the day. I have to say that some of those wide lock gates are  pretty stiff when you are on your own! On the good side, Annie is travelling down hill and northwards, so the top gates are often blown open for easy entry, due to the North wind! On the bad side, at least one of the bottom gates blows open after you leave the lock .... hmm...
John had a nice chat with the chap living at the nearby lock cottage below Kilby Bridge, but only saw two boats the whole day until Gee Lock. Here, heavy rain forced a halt for a couple of hours around lunchtime. The sun came out and surprised him into continuing through the southern approaches to Leicester. Every time we return to the river Soar and Leicester, we like it more and appreciate the countryside and green corridor into the city.
Robin Linklater on NB Corinthian kindly let John breast up, as the Castle mooring pontoon was fully occupied. Then tea and Rugby World Cup on the tv!


Posted by Narrowboat Annie at 09:20 No comments:

Set off in light drizzle from Foxton Locks, and worked hard but steadily, after Saddington tunnel, through twelve locks to Kilby Bridge. I was well ready to sink a pint and listen to the conversation in The Navigation, and catch up on emails, Facebook and the text for this blog. I will have to wait for adding pictures until I can link my camera to the Internet , the iPad cannot do this :(

Sun 4 Oct Autumn across the summit to Foxton locks

An early start from near bridge 9 above Watford locks in the mist, with Ali. Overcast but the sun came out at times as we made our way across an autumn canalscape towards Foxton. After the collision yesterday, it was good to meet no one in the Crick or Husband Bosworth tunnels. We met three boats only, then burst onto a crowd at Foxton Top Lock - no pressure, then!


For once, we had to wait above the centre pound, while a boat rose three locks and came into the pound. Then we crossed over. We really don't think the volunteer lock keepers understand the locks totally. Water was pouring over the weirs from pond to pond, so was this necessary? We weren't hurrying, anyway.
It was great to see Sarah and Rachel with Honey, and Nephew Scott arrived to collect Ali, so we had a family meal together at the new pub, after a pint in the 61.
Liana disappeared with Sarah to get the car and re turn to Lincolnshire to do a day's work, leaving me on the boat to watch Match if the Day2 and consider life without Rogers at Liverpool FC.

Down 7 locks to the Folly Pie in the sun, empty the holding tanks and on to Braunston.

Visited Wharf House Narrowboats chandlery and bought six led lights and the white ash coating the chaps from the workshop recommended for exposed surfaces of doors and hatches. They always like to chat about their boat, which won the Crick favourite Boat of Show award in 2005, an achievement they are proud of.
﻿﻿ We passed five boats through Braunston Tunnel. We were hammered by a hireboat in the middle: See the scrape. Quite a shock, which makes you realise how much you trust the other boater to stay near the wall as they pass!
﻿﻿Picking up Liana's sister Ali at the New Inn, Long Buckby, we went up Watford locks by ourselves in the gathering dusk

and moored before bridge 9, a favourite spot of John's, a pretty scene barely a stone's throw from M1 and Watford Gap services!


Posted by Narrowboat Annie at 16:39 No comments:

On the South Oxford Canal

Set off in the mist from above Somerton Deep Lock near the lift bridges, passing NB Conqueror, we enjoyed yet another sunny morning travelling north through Aynho Wharf. We passed Mortimer Bones, complete with face mask, working on NB Bones. No doubt we shall read about this in CanalBoat, soon.
﻿

Our old share boat NB Osprey was moored there, so John patted an old friend as we went past. The canal was quite busy both ways, but we didn't have to wait too much, enjoying the usual friendly chats.
Reaching Banbury, we moored below the lock as we were fourth in a queue, and found our favourite pizza restaurant for lunch. Food shopping followed, then Liana bought herself a duffle coat, complete with furry hood, for the winter. The car was ok, so off we went again, towards Cropredy and Claydon.

Wed 30 Sept from Thrupp to Somerton    A Berry beautiful day!

﻿
﻿ Sunny but autumnal, we photographed the rose hips, thorn haws, elderberries and sloes decorating the   hedges. We shared locks with several boats, including the diamond shaped lock below the River, with a cheerful inexperienced group of ladies having fun on a day boat. One slightly disgruntled angler commented that the cut was like a motorway, today! It was busy, but most old were determined to have fun!

﻿
A gorgeous day saw us up, passing through Oxford and across beautiful Port Meadow to Duke's Cut. Negotiating the liveaboards there, we found ourselves back on the narrow canals again ......
Thrupp beckoned, and we moored outside the Boat pub again, enjoying wine in the sun.

Posted by Narrowboat Annie at 13:45 No comments: