Wednesday 1 November West Stockwith to Clayworth on the Chesterfield Canal
Progress was slow after Misterton, as even the centre of the canal is shallow, noticeable after our travels along so many other canals this summer.

Progress was slow after Misterton, as even the centre of the canal is shallow, no


We were pleased to see a dredger moored up, and some sections dredged. Offside vegetation trimming was evident on the way to Clayworth, which may well be thanks to Python and her Chesterfield Canal Trust and RWBC volunteers this year. 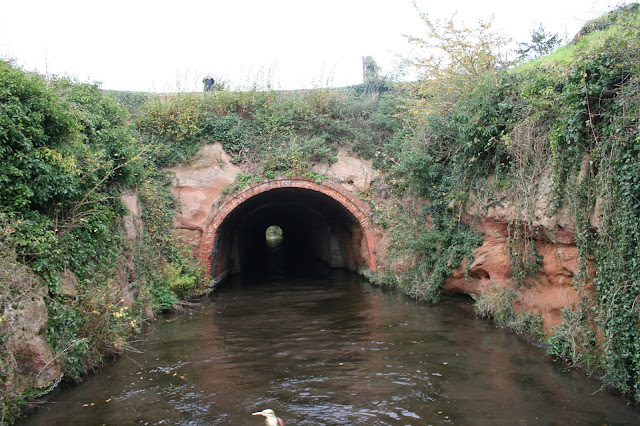 For two miles either side of Drakeholes Tunnel more dredging is needed, for sure. The West Stockwith lock keeper told me visitors had turned back because of the shallowness. CRT are trying to encourage people to use the River Trent, so dredging is crucial to encourage boaters. Also, when six feet or more from the bank it is less than a foot deep, this causes faster water movement backwards as the boat moves forwards, plus white water wash, creating more bank erosion, even at only 1 or 2 mph.


Once past bridge 69 the canal deepened and we soon arrived back at base, Rerford & Worksop Boat Club, Clayworth, after our five month Retirement Adventure 2017!

Tuesday 31 October Down on the ebb tide from Torksey to West Stockwith
After a leisurely start, we had coffee, cake and stew at the characterful tea shop at Torksey lock, open after 11 am most days. As it was neap tides at the first quarter of the moon, with High Tide Torksey about 1830 and West Stockwith earlier at 1630, we could theoretically travel down any time during the day before 1500, as the flood occurs only for the couple of hours or so before high tide here, as fresh water flowing downstream has to be overcome. 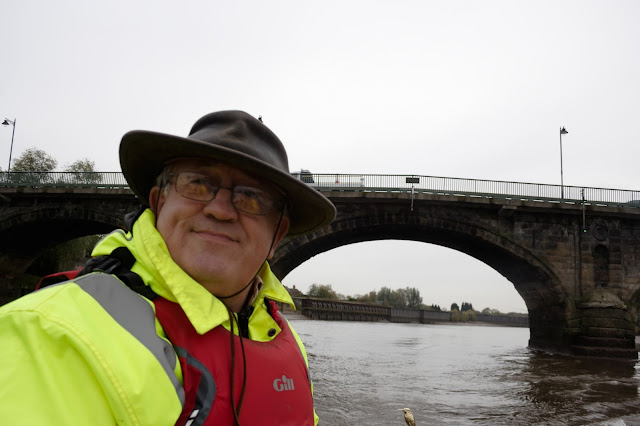 However, setting off at 1250, as advised by our friendly Cromwell and Torksey lock keepers, allowed us to reach West Stockwith exactly at slack water, about 1515, following the advice of the lock keepers at Torksey and West Stockwith. We used VHF (or you can use mobiles) at Gainsborough to check when the West Stockwith Lock Keeper wanted us to arrive. We could motor gently into the river lock without worrying about strong currents for those few minutes around slack water. We just had to wait until the keeper waved to tell us that the river had risen enough for us to enter the lock without touching the cill. (Usually, the tide is still ebbing quite strongly, so we have to turn to face upstream and edge crab-fashion towards the lock, turning in to it at the last minute with a quick surge on the throttle.) Once in the lock, water was allowed in very gently, so Annie wasn't pushed about, and we moored in front of the pub on the visitors mooring, as we were only staying overnight. 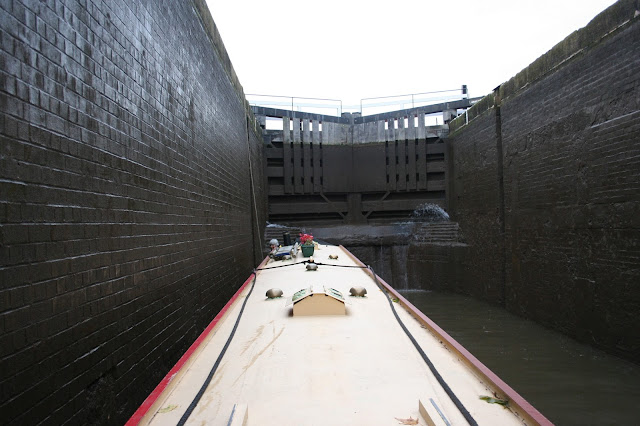 We were told that CRT is considering trying volunteer lock keepers on the Trent Tidal Locks: While help at inland non-tidal locks is welcome, our lives are in the hands of these experienced tidal lock keepers, who we rely on to give accurate advice. I am not sure that CRT office staff realise that high and low tides vary not only from day to day, but also depending on how far up river the place is. Also. When travelling up or down river, you need to consider how long the journey will take, which itself depends on the flow direction and speed, which varies with time. A tidal river flows downhill for most of the time, until the flood tide reverses the current up river, maybe for one, two or three hours, depending on how far up river you are. All in all, we cannot afford mistakes due to inexperience when lives are at stake. Finally, losing these people means losing their skills, too.
John Lower's booklet on navigating the tidal Trent is an important aid to using the Tidal Trent Chart.

Monday 30 October Newark Castle through Cromwell Lock and the Tidal Trent to Torksey
Liana decided to use trains, taxi and bus to collect the car from Trent Lock at Long Eaton, then drive to meet me a Torksey, visiting her mum on the way.
Leaving our usual mooring opposite Newark Castle, I took Annie to Nether Lock, by the sewage works and relief road, where I used my CRT key to operate the electric lock.


Lock keeper Bob arrived at 0930 and operated the bottom gates, allowing me to get on board and drive down to Cromwell Lock this cold but pleasant morning, before he called them on VHF to warn them of my passage. As usual, I used VHF myself to check they were ready for me. They confirmed that the best plan was for me to moor overnight at Torksey.

The anglers were out below Cromwell weir, and the cool but sunny morning beckoned Annie down river, past old gravel wharves. The tidal range is only a foot here, but increases to more like six feet before Torksey (and much more when it's spring tide, not neaps), so that is another reason why you see more mud as you go downriver with the current after High Tide at Cromwell. On a fine day the three and a half hour is quite scenic and peaceful. I must admit I stopped at Marnham to make myself  coffee, get a Kit Kat and have a brief pitstop.

On the VHF, Torksey replied and said I should moor below the lock. While I could ascend the lock, tomorrow I would not be able to descend the lock in time to leave, because the tide would be too low, the lock keeper explained when I walked up to the lock.

Sunday 29 October Holme Pierrepoint to Newark and a complaint to CRT!
After a lousy night's sleep as wind crashed Annie against the side, despite loads of fenders being used, I felt I must make a point about the poor  moorings set aside for visitors above Holme Lock, which is a lovely location to pause overnight. CRT, please take note!


The day trip between Trent Bridge and Newark is one of the most scenic you can have: It reminds me of the lovely River Loire in France. Leaving the Sunday white water kayakers behind at the Holme Pierrepoint National Watersports Centre, Liana operated Holme Lock while the lock keeper sorted himself out. He let Stoke Bardolph Lock know we were coming via VHF channel 74.
Twenty miles and five locks separate Nottingham and Newark: Holme, Stoke Bardolph, Gunthorpe, Hazleford and Newark Town Lock itself. Despite blue sky between the clouds, John needed coat and gloves to enjoy the lovely day.

The German-owned gas turbines have replaced coal at Staythorpe. Round the corner, the weir precedes Newark Dyke, which leads into the town past Farndon and Newarek Marinas to Town Lock and moorings opposite the castle (or you could use the pontoons a bit further on, in front of the CRT offices).

Nephew Matthew Fox had a"Snow White and the seven dwarves"  stag cruise with dad Phillip, uncle John, brothers-in-law John and Luke and friends Shaun, Lee and Graham last weekend. We enjoyed the trip between Sowerby Bridge and the artistic, Bohemian Hebden Bridge. It was a great chance for the men of Matt's and fiancé Zoe's families to meet. John was Grumpy!


Reaching Cranfleet Lock, we found the bottom gates would not close for the volunteer lock keepers. John offered Annie's grapnel anchor, which did the trick!


The pastoral four miles downriver to Beeston Lock pass quietly, past occasional groups of chalets and moored boats. The Beeston Canal takes you into Nottingham, where the Nottingham Canal continues past Castle Marina to Trent Bridge. We saw NB Lady Lee (from RWBC) at Trevethick's boatyard, and shopped at Sainsbury's,  near the marina and visitor moorings. 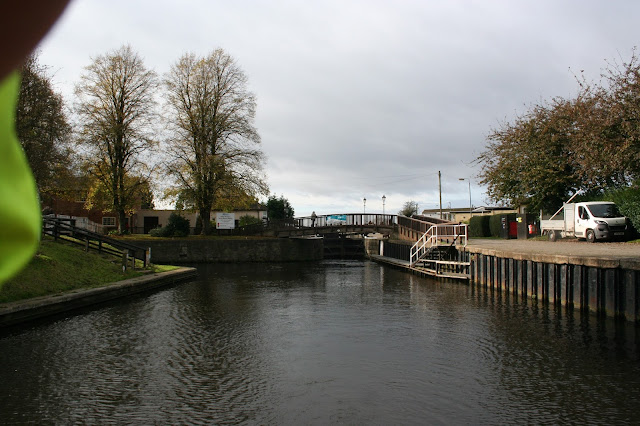 
Posted by Narrowboat Annie at 10:53 No comments: