Tuesday 28 July up the Erewash Canal to Green's Lock, Ilkeston


Wed 29 July up to Langley Mill


Thur 30 July all the way back to Trent Lock
Dave and Rose on Eliza Rose accompanied us through all the locks.


Friday 31 July sunshine and water pumps
Posted by Narrowboat Annie at 14:02 No comments:

Through Nottingham to a Chicken and Leek Pie

After Sunday with the family, seeing our great niece Orlaith, great nephews Jake and Flynn and their slaves, we set off late for Trent Bridge. The Trent was wide and lovely under a cloudy sky. Locking up onto the canal, we watered up and John took Jessica in her new cat harness for a walk ... Not keen yet, but ok. We are always surprised how pleasant Nottingham and the Beeston canal are. The stretch of river up to Cranfleet has its moment, too, including that rather strange outward bound place on Barton Island, with camouflage nissen type hut and sponsored by the lottery? We locked up with Peter and family on Free Thyme, a fellow Retford and Worksop Boat Club family. A tasty chicken and leek pie at The Trent Lock completed a windy but good day, moored up on the Erewash canal.
Posted by Narrowboat Annie at 17:39 No comments:

We don't need to rush! It's hard to take this in, but we'll try. After sorting home out, we took Jessica, our cat, with us ...... Not a good traveller :(   After backing Annie to the car and loading up, it was so sunny that John backed her through the bridge hole, winded her (360degrees turn) and off we went to Drakeholes, squinting into the setting sun!

Read more »
Posted by Narrowboat Annie at 20:04 No comments:

Liana got a lift to work, so I could go to Annie and do a few jobs before joining her sailing at Lincoln with her school at 5PM.

It's that time when you start ferrying "things you may need on the trip". Quilt, yes, lifejacket, yes, strimmer  .... maybe ....

I've been cutting the grass back from jungle on the canalside mooring, bit by bit, so it now looks pretty tidy, with nettles, rampant bindweed etc etc gone from the level ground, leaving the grass to grow and fill in the gaps. You can now see the power socket pedestal and reach it without getting stung! The view across the landscape is vastly improved, so I sat enjoying it with tea and sandwich in the sun.....  I then got told I had cut it too short! Ah well ....

Tried a big carton of malt vinegar and plastic bowl to improve the dreadful brass mushrooms .... not perfect, but a considerable improvement.

As for the anchor, I have fitted a double hook to hold the front lifebuoy and attach the top link of the anchor to, to avoid it falling over. I shall report back on its success.

Wind was quite light, so we took out picos and me a larger Wayfarer dinghy singlehanded. Great fun, with its big sail area, but that night and next day I felt like I had played two rugby matches! Oh, to be young! Pass the cocodamol!

Posted by Narrowboat Annie at 17:38 No comments:

On the Chesterfield Canal around Retford: A weekend in the sun

This last month has been very busy for us both. Liana still teaches, part time. We both sail every Tuesday with Lincolnshire schools at Lincoln, sailing or manning safety boat. The annual Lincs District Sailing Association, of which Liana is President, held their sailing regatta, which has been great fun. Market Rasen Garden Festival was organised partly by our Lions Club, of which John is the new President, and the Lions also collected for DiabetesUK and the British Heart Foundation.  John's church commitments continue, including bell ringing, administering the chalice, serving tea/coffee after and performing duties as Verger at funerals ("You can be Verger now you're retired ....").

We fitted in a work day at Retford and Worksop Boat Club on 13 June, although heavy rain meant most of the work was indoors this time. We did manage to trim some of the long grass on our mooring, later. 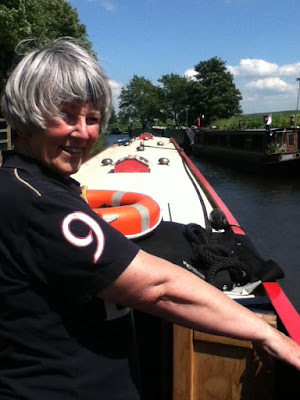 Finally, we chilled out and motored up to Retford, taking our time and peering over the side at the myriads of fish in the clear water. While there was a lot of blanket weed, everywhere there was a clear gravel bottom we could see the fish in the bright sunlight, including bream, perch, pike and some big chub. Wonderful!

We moored on the embankment at Retford, near Asda, walked, wandered, ate a nice pizza nearby and watched Wimbledon. Saturday, we meandered up to the Forest Locks and back, chatting to the fishermen and fish gazing again. The moorings and services at the third forest lock were lovely.
Saturday night moored between the Town Lock and the Hop Pole was peaceful. Sunday morning we dawdled back to the RWBC at Clayworth, followed by a slim, beautiful Tern, who dived for fish around us. We did some tidying and puzzled where to stow the new 20kg anchor (hmm..), which is too big for the gas locker :/  With river work on Trent and Thames coming up, I decided an upgrade was wise. Liana still needs to be convinced ...

Posted by Narrowboat Annie at 09:58 No comments: