A winter cruise on the Chesterfield Canal

Ellie had arrived on the embankment at dusk and departed by the time we appeared on a wet, muddy morning. John dressed carefully to stay dry and warm, and set off once the weather was not too rainy. We moored opposite the Retford Boat Club and had a stroll into town.


John picked up five hardback Terry Pratchett novels from a charity shop to improve his collection. We had an excellent skinny latte and panini at the little Italian deli on the way back from the Market Place. Ellie & Co had stopped off at the Hop Pole pub, so we waved as we passed by. After WhitSunday Pie Lock, Liana settled down in front of the stove while Annie returned homewards in the light rain.
One question: Does anyone know why there are some mini standing stones in a small glade next to the canal, between Clarborough and Clayworth? Hmm .......?

Tue 16 Feb A frosty morning, then Ranby to near Retford
You know it's better to have a walk when the pebbles and sticks bounce off the ice in the canal. We had to set off back today, if possible, but clearly needed to wait a while. We stretched our legs by walking half a mile back to bridge 51, then onto the road back past the almost complete Chequers pub to the A1. A short walk along it southwards brought us back to the canal near the boat. Even after my recent knee op, I managed the embankment down to the towpath. The ice had melted somewhat, but we had just decided that an ice breaker appearing was highly unlikely, when fellow RWBC member Ellie and her family came round the bend in their narrowboat, winded and moored! They had decided to go no further.

After thanking them for breaking the ice for us, we set off steadily, trying to avoid damage to our new blacking. As we approached Forest Upper middle lock, we realised that things were about to happen! Two big rig artics appeared with boats to be lowered in by a huge crane lorry from Tuxford. Two lady boaters told us they were moving from the South Stratford Canal, but were wary of the River Trent passage. Sharing cranage at both ends had reduced the total cost to £2000 for both boats, they said.


After emptying toilet holding tanks at the Elsan disposal point, we carried on to the bollarded moorings on the wooded embankment just outside Retford, where we enjoyed a peaceful night.

Mon 15 Feb A leisurely stroll to the A1!
Day dawned with snow on the roof. Wrapping up carefully was a good idea, today! 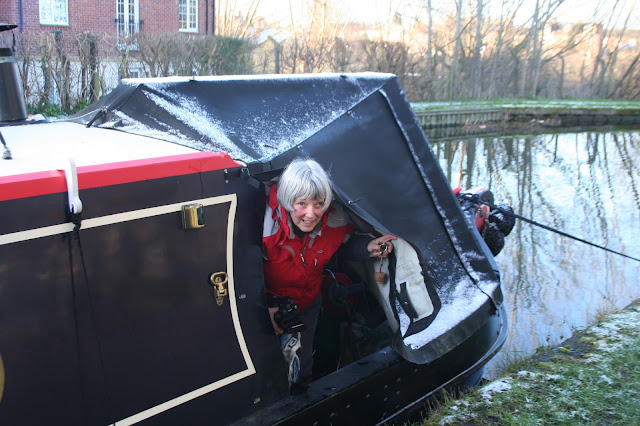 We started the day with a circular stroll through the park next to ASDA, admiring the play parks, the riverside path next to the Idle and the spring flowers. 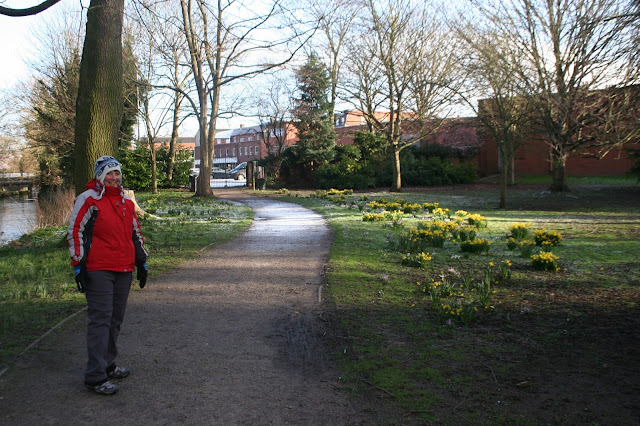 We admired the Town Hall (Mairie?) in the Market Place.

We passed parks and cemetery on our way to the countryside and the four Forest Locks, three miles away.

The third lock (Upper Middle Forest Lock) has a good CRT facility just above it, with water, loos plus rubbish and Elsan disposal. A few boats have moorings either side of the lock, but there is room for visitors.

A surprise awaited us as we left Forest Top Lock: A moving narrowboat! The folk on NB Buzzard told us they had decided to give the locks up to the tunnel a miss, so winded at Worksop. 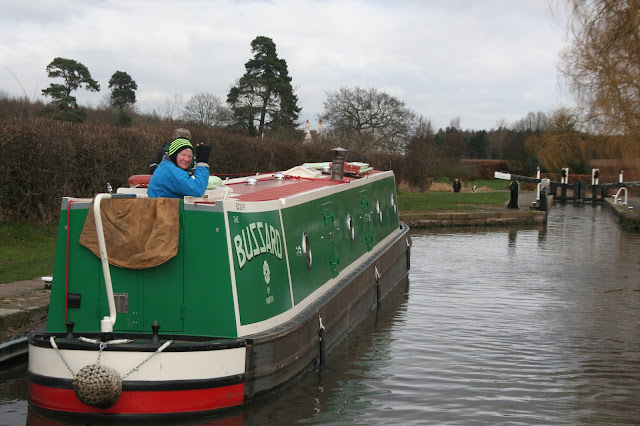 After a rural interlude, Ranby appeared in view. Bridge 51 is quite scenic, although you need to watch for the boat moored on the corner garden next to the bridge. We were pleased to hear, from the builders finishing off work, that the Chequers pub should be open by 19/2. A1 road noise is intrusive in the village, but we suppose people may get to tolerate it. Once through the A1 underpass, the bollarded moorings a few hundred metres beyond, just past the large winding hole, afford an excellent view over field and woodland to the west.

Sunday 14 Feb a post-canapé cruise to Retford
We had a great time at the Retford and Worksop Boat Club last night, demolishing the canapés and chatting with our new boating friends at Clayworth. Thank you to the organisers and helper! After a leisurely start to the day we enjoyed the sunny winter weather and countryside to Whitsunday Pie Lock and Retford, mooring outside ASDA on the embankment in the gathering dusk. After two knee arthroscopy operations in the last few months, John has decided to help his knees by losing some weight, so we are both dieting. John has also given up alcohol for Lent .... hi, ho... Actually, Liana has taken the lead by cooking without so much carbohydrate and much less fatty food, partly using the Hairy Bikers cookbook, so that has made the food more interesting.
We both like Retford. For a small town, it has several pleasant park areas and canal paths to walk; a pedestrianised shopping area near the rather French-looking Market Place, with plenty of decent shops; a small canalside theatre; plus a selection of reasonably priced pubs, delis and teashops.

Posted by Narrowboat Annie at 16:42