From White Rose to Red Rose

Thursday August 11 Down Barrowford locks through Nelson to the Inn on the Quay, Burnley

A wet night and morning, but a misty view of the hills and Barrowford reservoir. We used binoculars to view a distant farm straw fire on the hill opposite. It may have been a mistake to set off, as Liana found the stone cobbles around the locks slippery. A couple of volunteers helped at one lock, while John helped with shutting top gates and opening bottom gate paddles, before getting back on the boat, as we were going downhill. 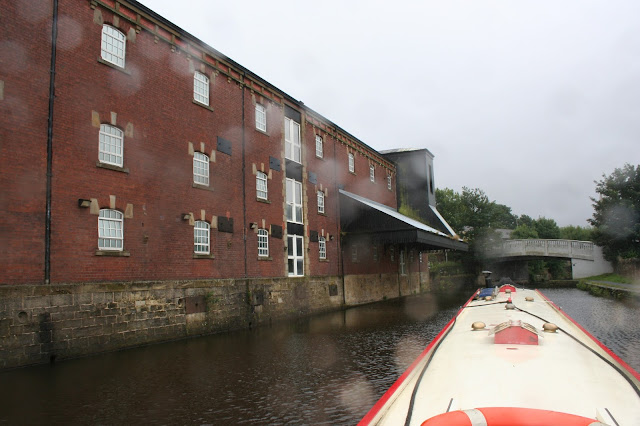 Liana could relax once the seven wide Barrowford locks were done, while John took Annie the seven miles  through largely urban and industrial settings past Colne and Nelson to Burnley.

The 70 feet high Burnley Embankment is one of the seven wonders of the canal world. The Weavers Triangle is a nice little historic canal spot high on the hillside above Burnley. We moored under the roof beside the Inn On The Wharf. This gave us chance to get online, for John to have a couple of pints of Copper Bitter and listen to the Thursday Night Jazz Band.

Wednesday August 10 East Marton through Foulridge to above Barrowford locks

Leaving the rough but sheltered East Marton moorings behind, we continued along the long scenic pound around the hillsides, enjoying the sun and the views. We had a walk around Foulridge village before trying the Cafe Cargo on the wharf – ok. After waiting for an oncoming boat and a green light, we passed through the dripping 1650m Foulridge Tunnel to moor above Barrowford Locks and enjoy the view. The rain started soon after, so it was a good decision: Olympics viewing again – we enjoyed it all, especially the 7-a-side Rugby ….. Come on, Great Britain!


Tuesday August 9  Gargrave to East Marton(4 miles, 9 locks)
Liana's Birthday today! I sang Happy Birthday, as did Joanna on the phone, later. We had pain au raisin before setting out, following two boats up the remaining two Gargrave Locks, Steg Neck Lock plus the six Bank Newton locks. Thankfully, NB Sweetpea arrived and came up all nine locks with us, sharing the work – thank you!! We have moored on the following beautiful stretch before, but strong winds, coolness and clouds made it a little less pleasant.


However, a slap up late Birthday lunch at the Cross Keys in East Marton, including pudding, went down very well! We decided to stay on the rather rough visitor moorings there and read, watch the Olympics, Countdown, Tipping Point and Pointless, Liana's favourites.

Monday August 8
After travelling up from home after celebrating Liana's birthday with the family, we shopped and ate in Skipton Morrisons, before driving to Annie at Gargrave. Unpacking, parking the car and doing a few jobs left us weary, so we read in the afternoon sun. Liana watched Countdown, Tipping Point and Pointless. We watched the Olympics later.
Posted by Narrowboat Annie at 17:44