After a week with our cousins in Aytua, a tiny hamlet up a precipitous road from Villefranche de Conflent, in the foothills of the Pyrenees, we spent today moving cars to our canal destination, Port Cassafieres, near Beziers. Dropping off our hire car in Carcassonne, we taxied the rest of the way to Castelnaudary, where we boarded this big plastic boat! The girls, Aileen, Geri and Liana had had the briefing, as we had been delayed, but the office kindly gave us a quick run through again before they left for home. We had a drive around the large basin before dropping them off and having a short run up the canal to the first lock above, where John turned the boat using a tiny joystick, which spun the boat on its axis! At the first narrow bridge hole, he found that you cannot go in reverse and turn at the same time, however. The boat, or Le Boat, just fits under the smallest bridge, we are told: time will tell ..... 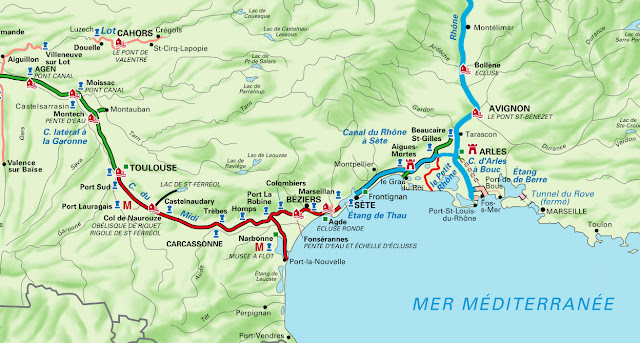 Returning to the Port Basin at Castelnaudary, our place had been taken, so we reversed in to a gap further along: The square sterns make this straight forward. We moor like this at West Stockwith Basin with Annie, on the Chesterfield Canal, but there is a post 20 feet out to tie to, to stop the boat swinging there.
Next morning we have to queue for the four staircase lock flight. Strangely, the lock keeper sees three boats together all the way down, then one up, before we can go down. In England, two or three boats might follow one another. Maybe it is because there is just one person.
Most of the 62 locks are earlier in our trip, as we descend from the hills: Later, there is a 53km (33 mile) pound before the seven Fonsarennes staircase locks at Beziers, near the end of our trip. There are lock keepers at all these locks, each with a remote control to operate the lock gates and paddles. It is our job to control boats, including using two ropes, in each lock. More or less all the locks are oval shaped, like sideways arches, and this design has stood the test of time. It means that you can often fit three boats in together, if the biggest stays in the middle on one side. This is usually us, as our boat is the biggest they hire out. It has a large kitchen / saloon, behind which are three en suite double bedrooms for we three couples. Above, we can eat and lounge in the sun, with or without the large blue pram top type sunshade. The boat has a steering position inside, but we used the rooftop position, with its better views of scenery and for manoeuvring.

Posted by Narrowboat Annie at 10:24