Autumn on the K&A


Thursday 17 Sept Something in the air!

Up to a sunny morning after a night of rain, we slept like logs after the 23 locks yesterday. John opened the bottom gate of the Devizes six and checked that Anthony and Rebecca on Selwood were coming with us. A disgruntled lady on a wide beam appeared, and grumbled that we took our time! Then as we emerged from this lock, we saw that they had closed the bottom gates after the widebeam exited, and were filling it! John honked his horn, and had a word with them after mooring, but the people were unrepentant, saying they didn't see us, despite the widebeam lady telling them! Then we found two boats coming down the locks singly, after one refused to share the lock with the other. Liana decided that there must be something in the air today!
After completing the six locks,  we said goodbye and thank you to Anthony and Rebecca and their folks, after a record of 32 locks shared from Bradford on Avon to Devizes! After a pleasant trip into Devizes to shops and market, we car ride on Eastwards towards Pewsey. 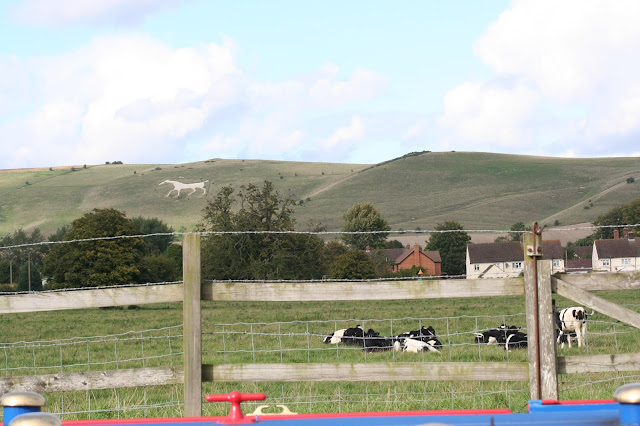 Posted by Narrowboat Annie at 11:03