12 August Up the Nene: Oundle to Thrapston


After checking oil, John took Annie to top up with diesel next door at Oundle Marina, with its narrow entrance. The marina has showers, loos, Elsan and laundrette and a good chandlery, the first since Fox's Marina at March on the Middle Levels. John thinks one of the leisure batteries may be on the way out, so measured the battery voltages, which seemed low at about 12 volts. Next job will be to measure each battery voltage separately – they should be nearer to 12.5 volts, so a damaged cell may cause a lower voltage and potentially harm the other batteries. The engine is still losing a little oil intermittently, rather strangely. The helpful marina chandlery gave us the name of a mobile Nene boat mechanic, Rick Daimond, 07481 090922, just in case ….

After messaging John's cousin about a possible visit and finding the EA key needed for locks, we set off, immediately having to wait as two boats descended Upper Barnswell Lock. John moved Annie back on the lock mooring to help the boats leave the lock more easily.
We passed the moorings at Lilford Lodge Marina before seeing the grandeur of Lilford Hall (once home of a famous ornithologist) and fancy arched bridge before Lilford Lock.


Cattle pastures and weirs border the river here, while the Nene Way crosses and recrosses. 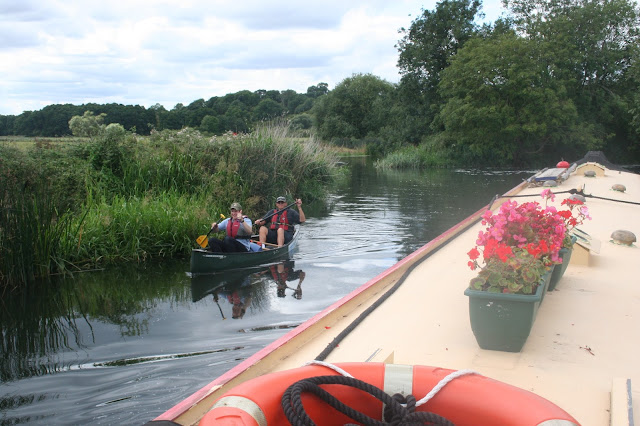 Canoes kept coming down river towards us, so John had to be careful.
At Wadenhoe Lock, it filled itself quickly once Liana closed the guillotine gate, water pouring over the top gates! Liana didn't need the paddles! The rest of the river is ok, so it must be the nearby overflow weir is slightly too high, forcing more water over the lock top gates.

Wadenhoe Lock filled itself as water poured over the top gate. We passed another wedding at Wadenhoe, using the wigwam tents seen recently at Water Newton. More canoeists paddled by on our way to the Middle Nene Cruising Club at Titchmarsh lock. 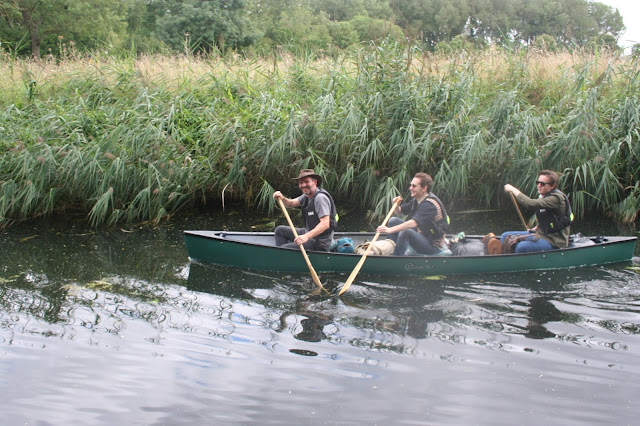 We avoided lots of canoeists and passed through a narrow sedge-filled channel on the way to our mooring below Islip lock, near Thrapston.


Apparently the Nene is pronounced Nen, not Neen, above Thrapston Town Bridge, so tomorrow we should change!
Posted by Narrowboat Annie at 10:00