After our canoe slalom weekend with Jo and Mark at Cardington, we slept in and only set off once the rain had stopped.

We stopped at the Tesco mooring in Rickmansworth before finding a quiet spot below Stocker's lock, before a mile of parked up boats began. With no tv reception, John missed the England soccer match, but watched a Sharpe dvd instead.

Tuesday 5 September Batchworth (Rickmansworth) to Cowley Lock, plus planning Thames trips (8 miles, 7 locks)
The sun shone through gaps in the clouds after a damp night. We set off, dodging drizzly showers, past lots of moored boats, some dilapidated and unlicensed, through Springwell and Copper Mill locks.


The Sharks have their slalom course in the strong currents below this lock.
Passing the Coy Carp pub, on the left hide more moorings, while lakes, flooded gravel workings, can be seen through the trees to the right. Black Jack's cottage at that lock had a good veranda. 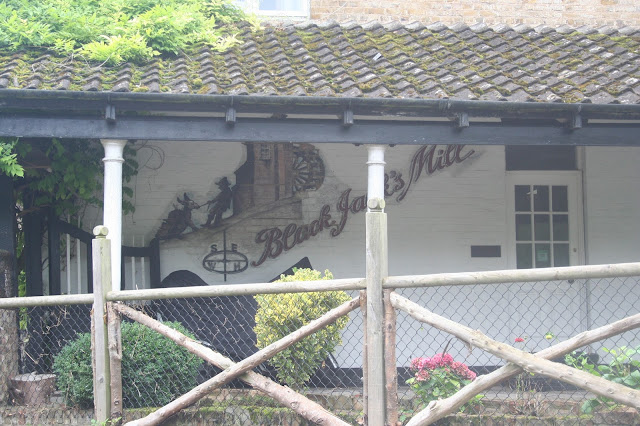 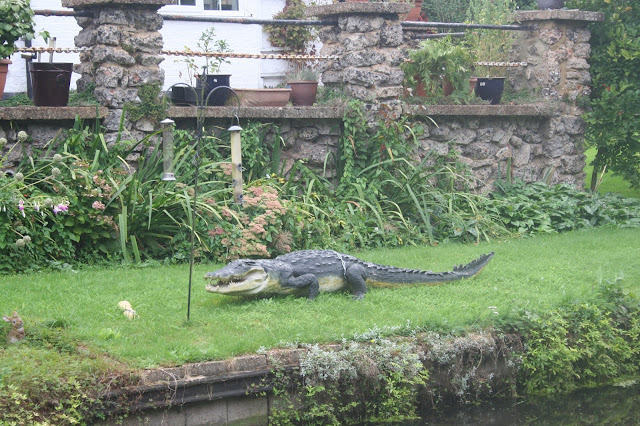 After seeing an alligator, we saw a protester's flag, against the HS2 rail track, hung near Harefield marina, close to where it should cross the canal – if it happens. 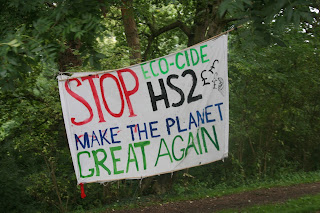 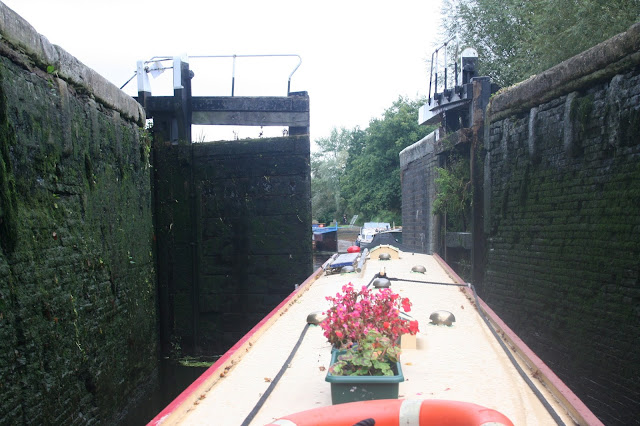 We paused for lunch on visitor moorings below the 11 feet deep Denham Deep Lock at the 24 hour Swan and Bottle visitor moorings, opposite a 1930s block of flats. The blue boat behind us looked like it had been there much longer, judging by the plants! 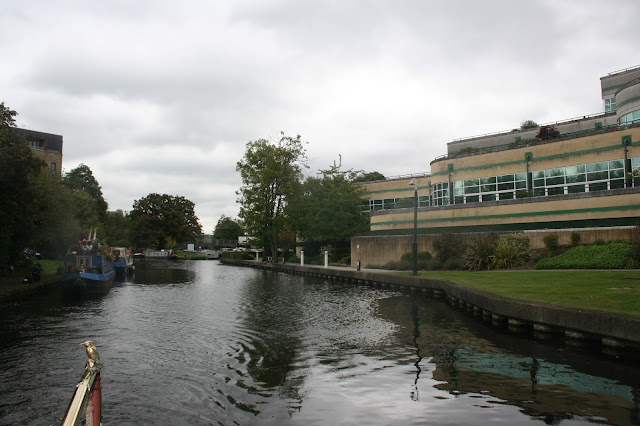 John would have stopped at Uxbridge Boat Centre chandlery, but the moorings were all full. Liana carried on counting all the boats without a current CRT license visible as we cruised passed boats on both sides before mooring above Cowley Lock, the last lock before the Slough Arm and Bulls Bridge Junction, where many boats turn East for Little Venice, the Paddington Arm, the Regents Canal en route for the Lee & Stort or Limehouse Basin and the Thames. After a walk in the park and a pint at the Malt Shovel by Cowley Lock, we dashed back to avoid the rain for a night in front of the TV and a read.

We have changed our plans to accommodate our daughter, Rachel, who wants to tour London's canals and the Thames next weekend. John has phoned the duty lock keepers at Limehouse Basin (020 7308 9930) and Brentford (020 8568 2779). The Thames Barrage is down all day on Sunday 10/9, so I was asked to ring the Port of London Authority (020 8855 0315). They advised that, as this would remove the strong tidal flood, slow narrowboats would take too long to reach Brentford, so Annie should go upriver on Saturday. After more phone calls, we have arranged to go downriver from Brentford about 3pm on Thursday 7/9, reaching Limehouse Basin about 6.30pm. After a day by ourselves on Friday, Rachel should join us, maybe at Paddington, and we can tour London's canals before being let out on the Thames from Limehouse Basin at 2pm on Saturday, reaching Brentford about 5.30pm (they think it takes 2.5 hours, but we don't rush and take 3.5 hours!).

Wednesday 6 September The Slough Arm and on to Bulls Bridge (15 miles, 1 lock) 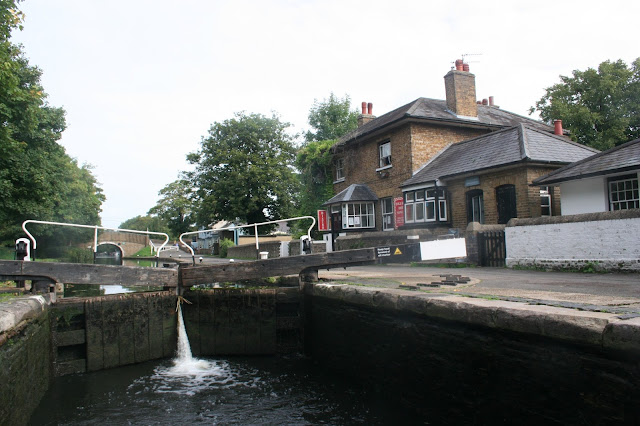 Up late on a lovely day, we descended Cowley Lock 89 with help from a volunteer, turned right at Cowley Peachey Junction by the Packet Boat Marina and headed West five miles to Slough basin.

We crossed several aqueducts and passed under trellis-type iron bridges plus the M25. 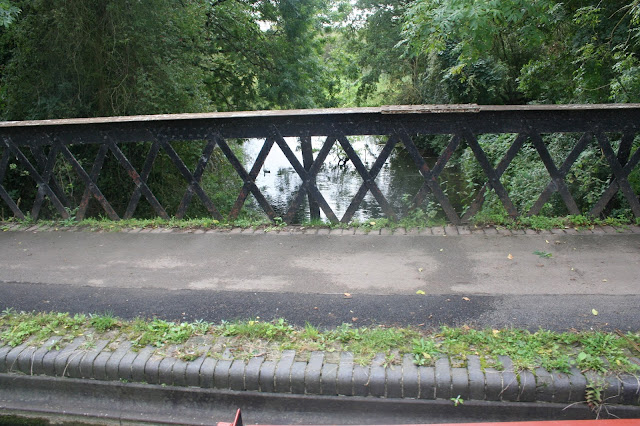 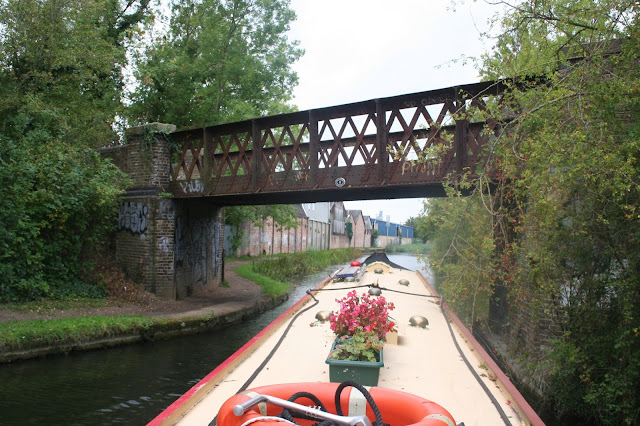 The canal is rather overgrown and very shallow in places, especially the last mile. Blanket weed, pennywort and other plants, plus lots of plastic bags and rubbish made John use the weed hatch at the last bridge each way. The basin was sadly neglected, but we managed to wind and moor. 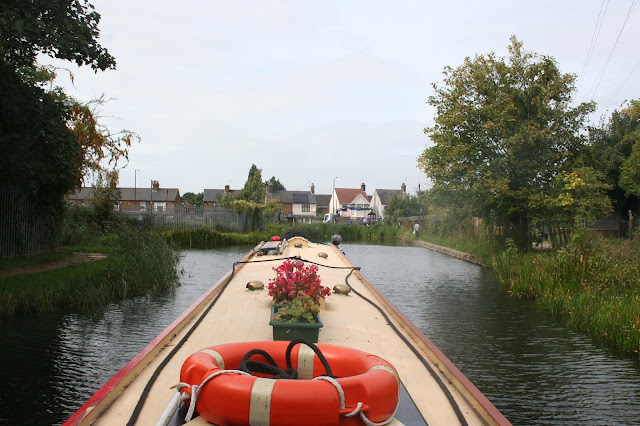 We walked to the town centre. Slough is being redeveloped, so we hope the basin will be part of this, eventually. We passed NBs Scotch Corner and Kaydee who were also exploring the arm, before the Slough Festival this coming weekend.


As we need to be at Brentford tomorrow lunchtime, we enjoyed the sunny late afternoon to travel the nine miles to moor at that historic junction at Bulls Bridge, where the Paddington Arm heads to London. 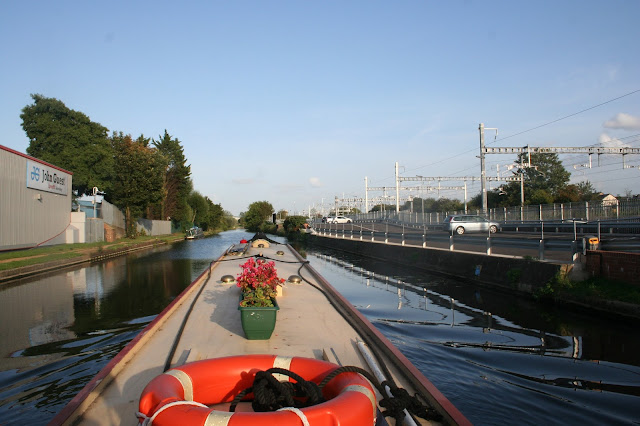 Posted by Narrowboat Annie at 21:49