May 19-22 Torksey Lock to Newark and Nottingham with Sarah. Alternator troubles ....

Saturday 19 May Up the Trent from Torksey Lock to Newark Castle and daughter Sarah. Alternator troubles.

Up at 7am, John set off for Torksey in cool air but bright sunshine, arriving at 9.30 in plenty of time for the flood tide before 11am.
Leaving Torksey Lock, the tide took Annie, followed by NB SolvForet (Swedish for Silver Forest), up the Trent steadily to Cromwell Lock. Her friendly crew told us they were taking her down to London for a relative, and having a holiday at the same time!

The tidal range up here is less than a yard, so the current upriver, which lasts a couple of hours, is not too fierce. It's very rural, but pleasant and relaxing.

Through Cromwell, we covered the last few miles to Nether Lock, under the A1 bridge, and moored opposite the ruined Newark Castle, below Newark Town Lock. 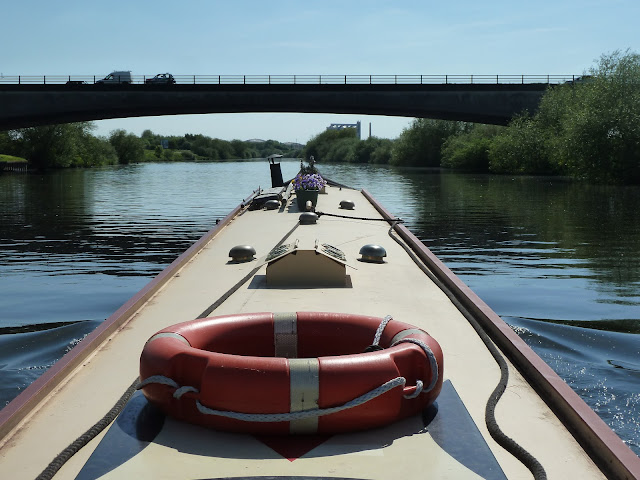 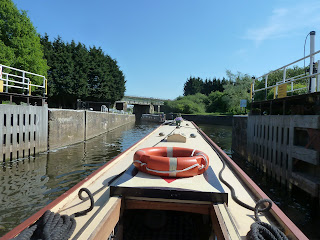 Blessed by a visit by daughter Sarah, we all toured the town before eating exotic pizzas at Zizzi's, by the bridge next to the castle.

The new leisure batteries were getting low, and it was clear that they were not being charged. John checked battery wiring twice – fine: An alternator test suggested failure :/
The solar panels bought for fitting sometime were needed NOW!
Sunday 20 May Solar power arrives on Annie. A glorious day with Sarah, up the Trent to Holme Pierrepoint near Nottingham.
While Liana and Sarah shopped, John pulled out the two 100W semi-flexible solar panels, solar charge controller, fuse and wires. In the morning sunshine the panels were soon stuck down on the roof, batteries connected to the charge controller via a 10A fuse, then panels connected, and we were in business!! 30 volts, 4 amps, so 30v x 4A = 120W (Physics teacher, power = V x I = volts x amps!!), which seems fine for a sunny day. By boiling water on the cooker, to save electrical energy, the batteries gained about 8% today, and went from red light low batt on the Victron Inverter to green ok :) It was worth it!

Sarah and Liana had plenty of time to catch up and chat. Sarah brought my Birthday Present from her, sister Rachel, Liana and Gran Flo – an Apple iphone 6S, which is clearly more clever than I am! After passing through Town Lock, the phone wouldn't work – Sarah realised it was sensing movement and thought I was driving a car, so switched off!! She soon got everything working except my email, which I managed to sort next day :) Great present, guys!!!!! …. and the camera is very HD, too.

The twenty miles to Nottingham are really lovely, very scenic, with waterside pastures and parks, wildfowl, sheep and cattle sipping river water. Today, the sunny weather also brought out narrowboats and cruisers in droves! Cue lots of waving.
The five locks (Town, Hazleford, Gunthorpe, Stoke Bardolph and Holme) are all large river locks electrically operated by their lock keepers. John used our handheld VHF radio to keep track of traffic and contact each lock as we approached.

Reaching Holme Lock after hours, the light was orange, so we operated it ourselves with a CRT yale key. We moored above the lock by the white water centre, and watched the rubber dinghies paddling in the evening sun. After roast chicken, Sarah was picked up and repatriated to her car by her very kind Aunt Ali (Thanks, Al!), who was visiting gran Flo nearby. All this fresh air and sunshine makes for a good night's sleep ….

Monday 21 May Through Nottingham to Castle Marina: Car collection and Alternator testing.

We spent a pleasant couple of hours cruising the two miles up to Trent Bridge and Meadow lane lock, past the old defunct entrance to the Grantham canal and Nottingham Forest's city ground.

The canalside near the castle and law courts is now much modernised. We eased into Castle Marina to visit their chandlery. Liana spent a large chunk of the afternoon travelling to Lincoln and Torksey to collect the car from the lock car park. It eventually dawned on John that we could charge Annie's batteries from the mains if we stayed at the marina, so this was arranged.
John got the tools out, took out the alternator, then took a taxi to Stapleford. Here, Steve Whyatt bench checked the voltage regulator and coils, tested it and pronounced that the rotor coil was kaput. A replacement was ordered for overnight delivery.
John found The Old Cross pub near Whyatts, serving excellent Worthington Creamflow and playing wonderful rock music, so rested and sipped happily with the locals while waiting for Liana to collect him. I slept well again, but someone else complained about the beer-induced snoring!

Tuesday 22 May Fitting a new alternator.

Liana spent some of the day with her mum, Flo, shopping, while John worked on Annie. Steve Whyatt rang to say that the alternator had arrived, and he had fitted the original belt pulley, so it was ready to fit. We popped over to Whyatts at Stapleford (near Sandiacre on the Erewash Canal, 6 miles from Castle Marina by road) to collect it and pay the £245 (it is a 24volt, 110A beast of an alternator). John fitted it quickly – apart from the fact that the top lug had M12 x 1.75mm metric thread, while the bolts for the older model had a finer, Whitworth thread :/ ….. the helpful staff at Castle Marina let John look in their box of nuts and bolts, where he managed to come up with a solution :)
We now have leisure batteries fully charged from the mains, plus alternator and solar panels working, too. Couldn't contact Whyatts, but will try again.
Posted by Narrowboat Annie at 11:46