May 23-24 Cruising from Castle Marina, Nottingham through Sawley up to Shardlow

Marina electricity had recharged the batteries. A local boater asked John to look at his solar set up and batteries, which appeared to be square NiFe cells, with transparent tubes supplying fluid to each battery by handpump. John explained the solar meters display, and noticed that the batteries were only 88% when connected  to the marina supply, so something seemed wrong. The clear electrolyte was low, with none in the pump reservoir. John had never seen a set up like this, so advised  that he contact the marina electrician and read his boat's manuals, to see if the fluid needed was distilled water or something else (Potassium Hydroxide solution)!
John returned keys and remote gate opener to the Marina office and bought two discounted brass folding steps to place on the boat sides forward of the solar panels. Liana moved the car outside the gates and we set off in the unseasonably cool and windy weather, wearing winter gear! We tootled along the Nottingham Beeston Canal, past Trevethick's Boatyard, Players and Boots factories, to Beeston River Lock.

John moored at the lock pontoon, close by the lock, so the two narrowboats coming off the river had to leave the lock one by one, to avoid Annie. How would two widebeam boats cope crossing over? The river was pretty, with lots of wooden chalets with boats waterside. Liana filled the 11' deep Cranfleet bottom lock slowly, to avoid bashing Annie around, helped by the friendly ex-lock keeper. He suggested we could moor at the end of the lock moorings, on rings, for the weekend, if we wished.
After lunch there, we headed off in the now sunny weather up a busy river to Sawley, where several volunteers locked us up. Working boats were making their way to a bank Holiday event on the Erewash canal, so I guess it will be lively early next week when they all leave ...  could be fun on Tuesday ....

Mooring opposite the marina on the 48h moorings, we visited the marina, got free magazines, brass ventilator, present, tea and cake, before viewing the boats. As it was 4.45, we called it a day, and chilled! Still couldn't contact Whyatts, but the new alternator worked fine, keeping batteries at 100%, so solar panels provided zero current until we stopped the engine, when they kicked into action. :) 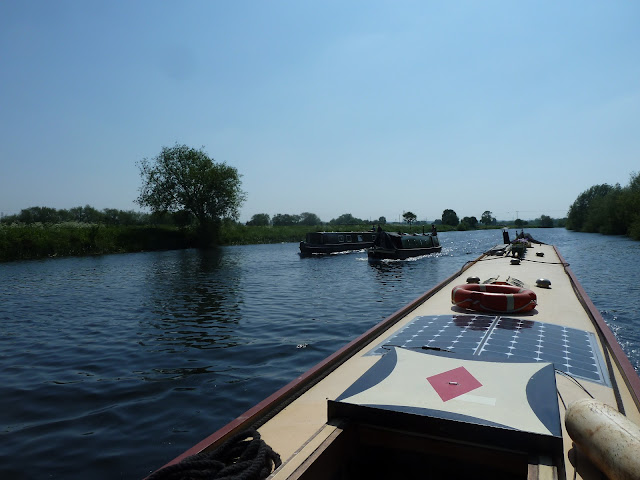 Thursday 24 May a short cruise to Shardlow

John cooked himself a rare |Full English with scallops - delicious! Liana settled for just tea, after which we set off gently the mile or so up the Trent to Derwentmouth, where the Trent & Mersey canal begins.

Traffic was busy, so we waited for boats to descend, chatting with the volunteer lock keepers. Once up, we passed the wide beam Peter Le Marchant charity trip boat, giving old folk a day out. we got a wave! the two marinas on the right are packed with boats. After the flood lock, there are two lovely houses on the right, one with its own private arm and the other with an O gauge railway track going all round its garden. 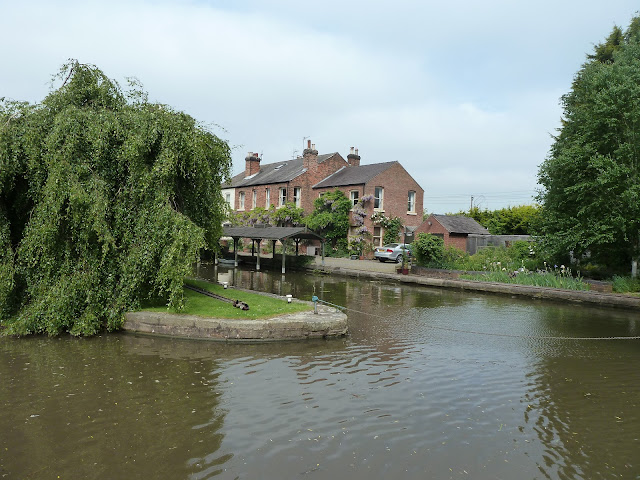 Passing the old New Inn (!) and Malt Shovel pubs, then boats being fitted out around Dobson's boatyard, we moored by the famous warehouse, at the Heritage museum, clearing out lots of mud. It was closed, though ….. open weekends and bank holidays only.


We like the unspoilt nature of this pleasant, friendly village, and walked round it, back to the two pubs, reading the information boards. Friendly folk in the Malt Shovel helped us find a local taxi when our Nottingham firm couldn't come.
Liana had got packed up, including dirty washing. I sorted the boat, and we decided to try leaving the fridge on while we left the boat overnight, to see how the solar powered batteries coped.

Posted by Narrowboat Annie at 11:59