Friday 17 August: Gas Street to before bridge 19 Blue Bell Cider Pub on the North Stratford Canal (12 miles, 0/1 lock)
We used the services by the Mailbox, which have water, loo and Elsan, but no rubbish bins. In sunshine we enjoyed a leisurely 12 mile trip through Edgebaston Tunnel, past the universities, which are being redeveloped, to Selly Oak.


Here, there is nothing marking the old junction with the Dudley No 2 Canal: The brick buildings opposite are flattened and huge new buildings are nearly complete. We hope there will be a stub of canal there, eventually. Through Bournville, with its Cadbury coloured station, we turned at King's Norton Junction and waited for a boat coming through the two open guillotine gates in the old stop lock. 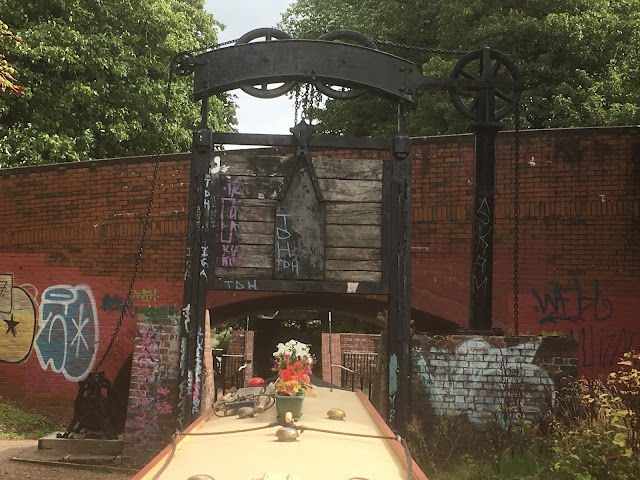 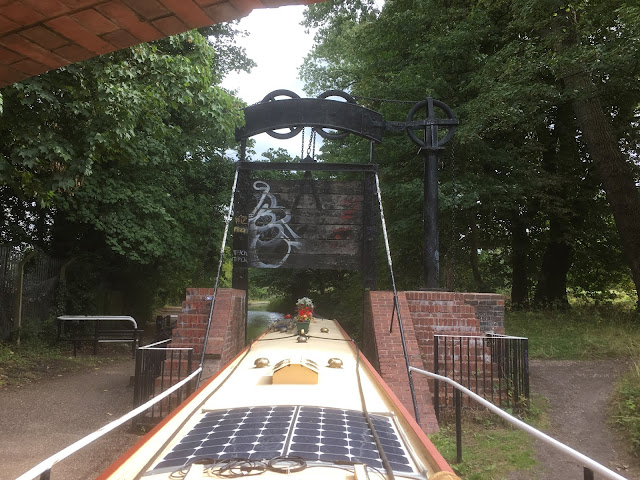 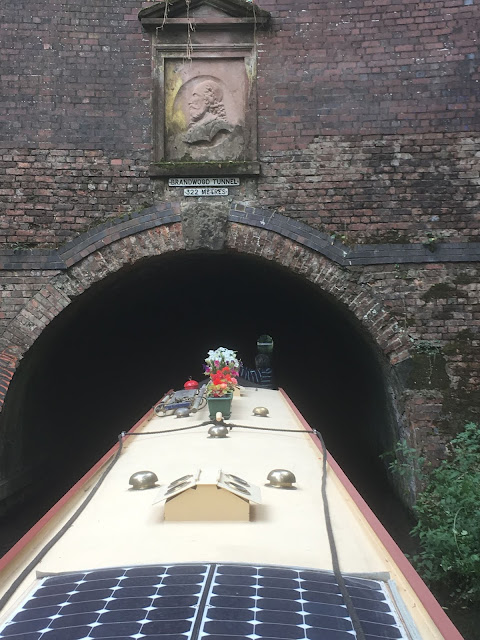 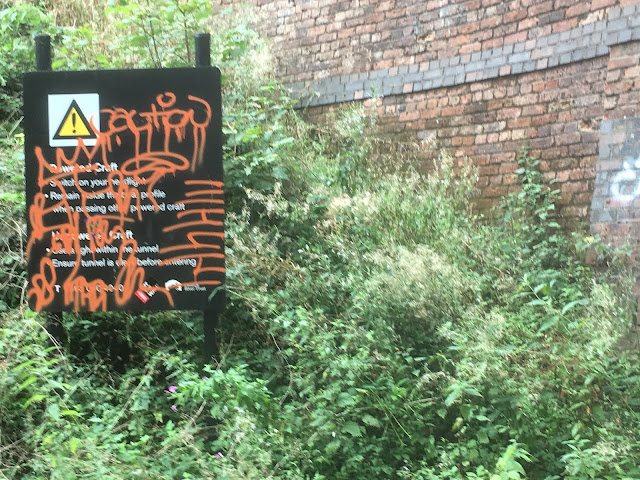 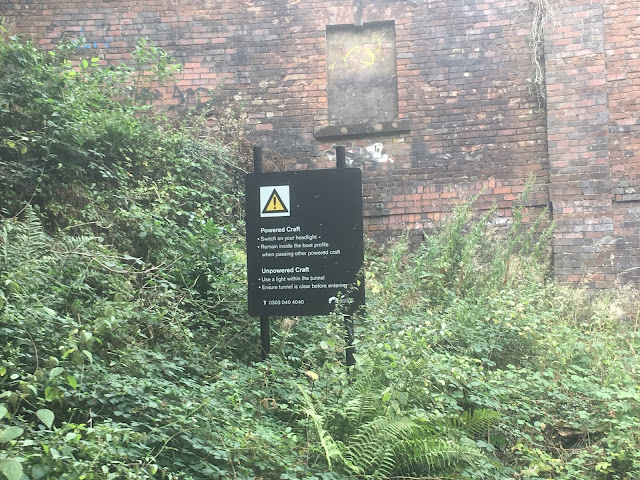 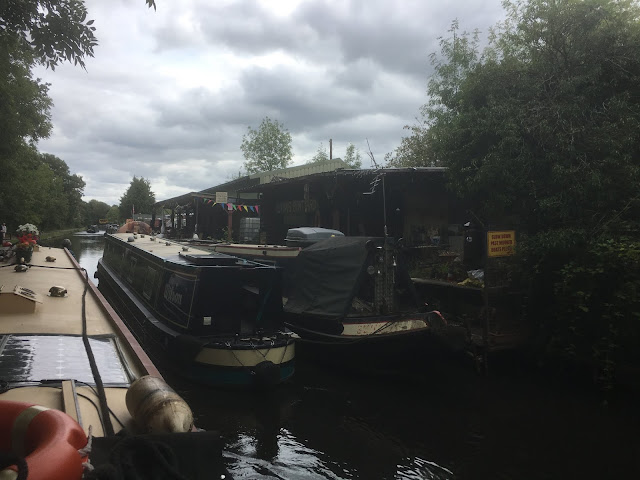 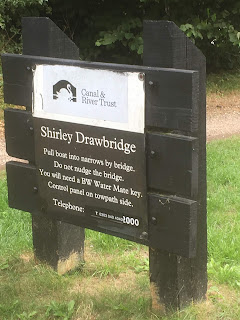 The canal feels quite deep, mostly, and weed free, great after the Wyrley & Essington Canal! The North Stratford Canal is still overhung by lots of mature trees, mainly ash, oak, willow. It feels quiet and rural, despite passing housing on both sides. Its twisty contour course and sharp bends meant we had to take care: We had a VERY near miss with a motoring hire boat: John accelerated and turned fast to avoid it – just! Brandwood Tunnel is tight for two boats to pass, so we waited for two oncoming boats – we had to back up as the first boat came out, so the second boat couldn't see us waiting and entered! Strangely, the sign near the North portal says “Check tunnel is clear before entering”, but as we left the other end, it said “two way traffic”! A cyclist applauded John's singing in the tunnel – he must have been tone deaf! Past Lyon's boatyard, Liana operated the electric lift bridge 8, on a busy main road. A sign said to bring the boat close to the bridge to minimise road traffic disruption, which John did. Once past the back gardens of Major's Green and Dickens Heath, we entered cuttings but saw no kingfishers, sadly. As there were lots of boats moored by Earlswood Motor Yacht Club, we passed by and stopped between bridges 18 and 19, well known for the Bull's Head and Blue Bell Cider Pub, respectively. We had a delicious Linguini Bolognese on board, and watched tv.

Saturday 18 August: down Lapworth locks to Kingswood Junction (5 miles, 19 locks)
The weather warmed up as Annie passed day boats from Swallow Cruisers, the Wharf Tavern and two manual lift bridges, which were easy to operate with windlasses.
The coal boat ahead of us was singlehanded, so we were pleased when a CRT volunteer arrived to help him. Once a cyclist arrived to help him, the volunteer helped us! He passed us on to a lady volunteer, who helped us and chatted all the way to Kingswood Junction: Thank you, volunteers, you were great! Apparently, they can help here, Hatton flight, Knowle flight, etc, but these narrow locks are easier. Liana helped the boat behind by leaving a top paddle open to fill the lock for them, as she left each lock. There are a number of faulty paddles, though, CRT! 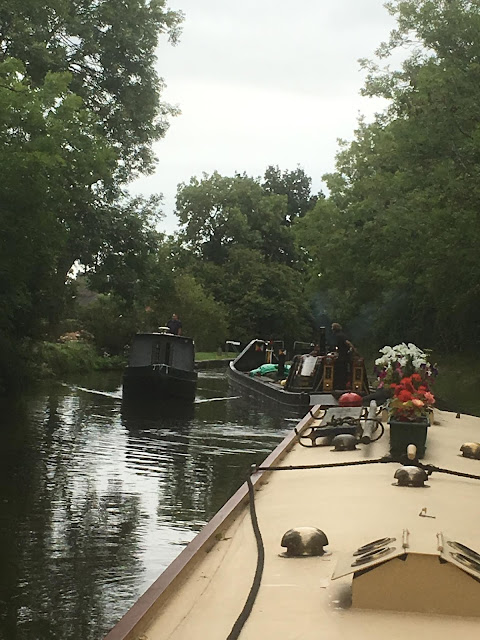 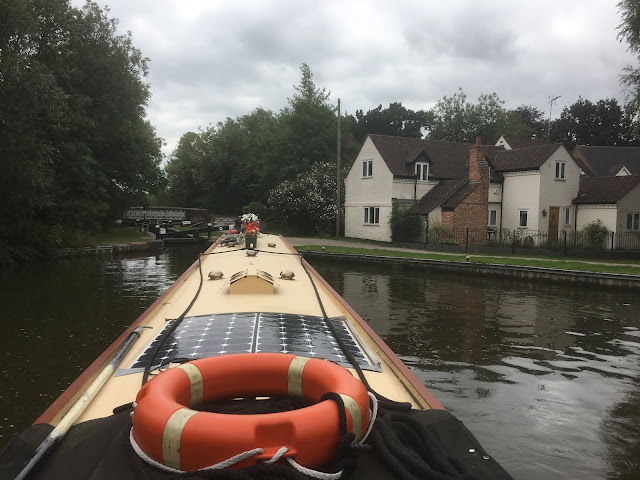 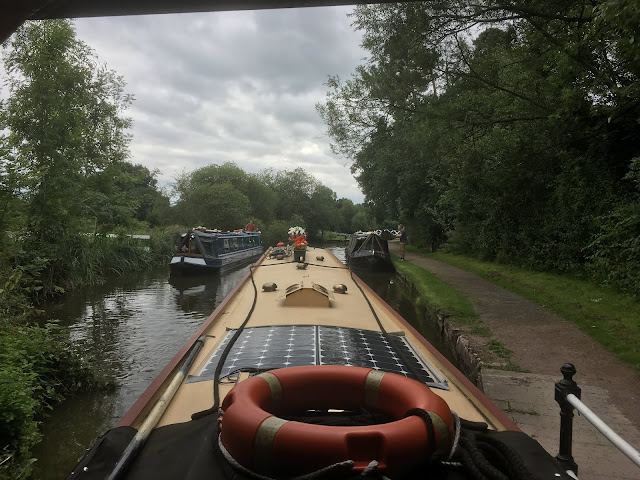 John took Annie through lock 20 onto the Grand Union, reversing to visitor moorings between the junction and the nearby Navigation Inn, so we could watch boats negotiating the junction and set off easily next day.

We enjoyed the evening sun, read and John watched Match of the Day (Man City won 6-1, Man Utd lost 3-2, so coach Mourinho was NOT happy!).


The locks gradually spread out as the valley flattens. Bridge holes can be very narrow, and many show damage, unsurprisingly. Modern repairs seem to last a short time. We crossed over with oncoming boats at a couple of locks, which helped, and arrived feeling fit at the Fleur de Lys pub, Lowsonford, so Liana volunteered us for a few more locks. Once through Yarningale Locks, with a short iron trough aqueduct before lock 44, we soon moored on a right hand bend with straight steel piling and a lovely country view.

Monday 20 August: through Preston Bagot and Wootton Wawen to Wilmcote (6 miles, 4 locks, 2 aqueducts)
We were up early and off at 0800 in the sunshine, avoiding overhanging trees around the three Preston Bagot Locks.
At Wootton Wawen, we paused and walked up to the Yew Tree Farm Shop, where the cafe was open for a coffee and tasty cake and Eccles cake for us :) The lady cook there had opened the shop (normally closed Monday but ask at cafe) so we bought milk, moroccan lamb pie (sounds good) and smoked bacon to keep us going until Stratford.
Setting off just behind one boat, we found another came through the bridgehole behind us, honking as John slowed for a photo on the short iron aqueduct over the busy main road. As Bearley Lock is a mile ahead, and we would need to wait for the first boat to descend, John didn't think there was a need to rush, but there you go! We had a pleasant chat with the lockwheeling lady as we operated the lock, and the steerer kindly closed the bottom gate for us. 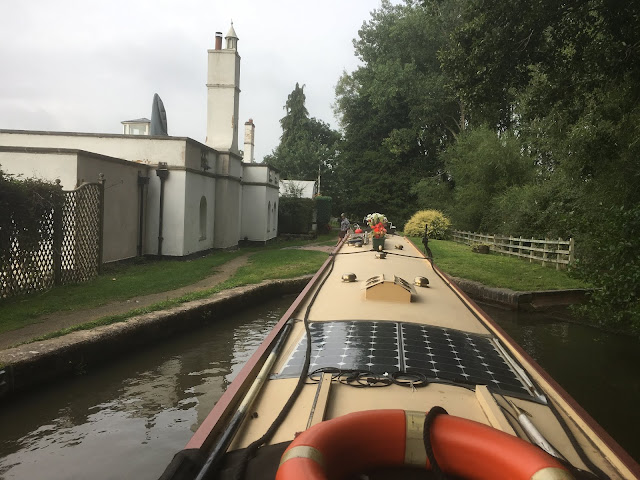 Edstone Aqueduct is always amazing to cross, with the water level high above the towpath, roads and railway, like a mini Pontcysyllte.
Hill Farm now has a brand new marina! 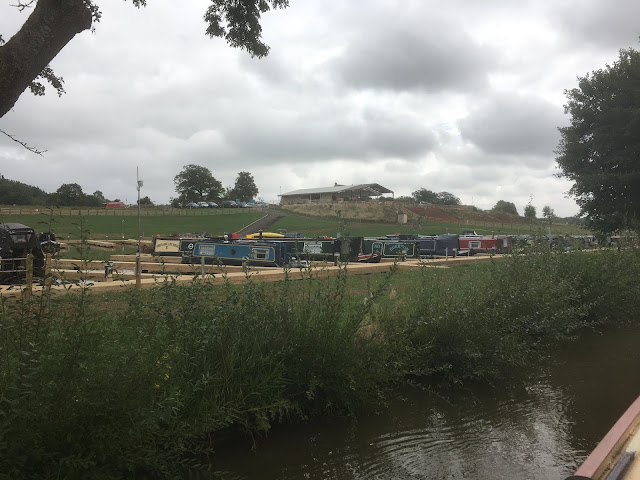 We moored at Wilmcote, before bridge 59, famous as the cause of canal closure threats which triggered the first canal restoration movement.

We revisited Mary Arden's Farm, scene of John's 65th birthday family celebrations this May, as our ticket lasts a year :)
After watching reenactments including a tudor meal, John was so hungry that he tried Frumenty (like risotto but with barley instead of rice) in the cafe: It was very tasty with salad! :)
Morroccan Lamb pie for tea!

Tuesday 21 August: down Wilmcote Locks to Bancroft Basin, Stratford on Avon (3 ½ miles, 16 locks)
Overcast but not cold, the weather gradually improved as we followed someone down the eleven Wilmcote locks, so every lock was empty, sadly. We weren't rushing, just enjoying the countryside and working the locks together. With single bottom gates and gate paddle, plus top gate ground paddles, John was able to enter each lock, close the top gate, drop paddles and open bottom gate paddle before getting back on Annie, while Liana set the next lock down and open top gate if possible, then returned to open the bottom gate for Annie to continue. It worked well, without us rushing. John even had time to fish for windlasses etc with our seamagnet – while explaining to an interested walker, John pulled up a brand new, shiny windlass! As we passed their new-looking brick building, three CRT Volunteers arrived, although only one helped us with one lock gate before disappearing! Later, the folks on NB Smaug told us they were letting three boats up their locks, then three boats down! They were not impressed! 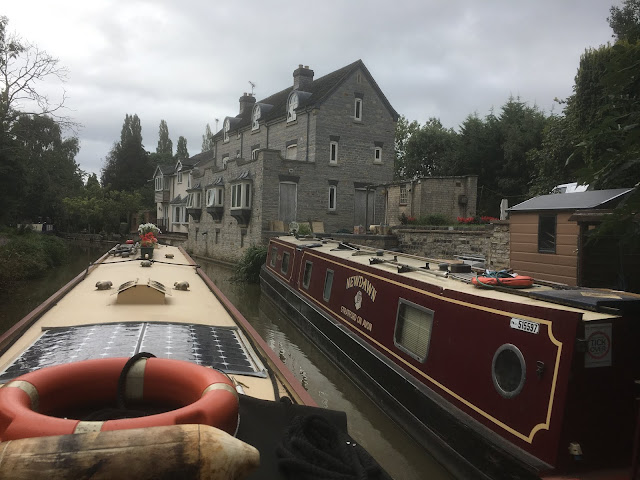 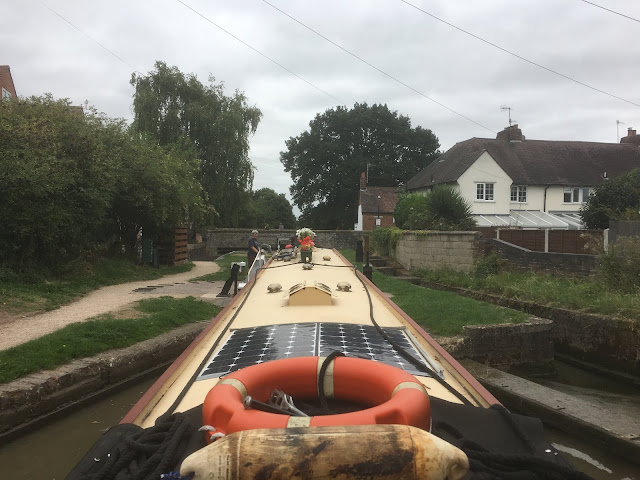 After Wilmcote bottom lock, we passed several moving boats near the CRT depot, which has water and rubbish skips, and took time for a cup of tea. With just one lock, we could chill and enjoy the tree-lined passage to Valley Cruises base. For the first time, we met an oncoming cruiser leaving the lock and had an easy time! Lock 53 has a very odd L-shaped bottom gate balance beam, like one at Penkridge, which was hard to close. 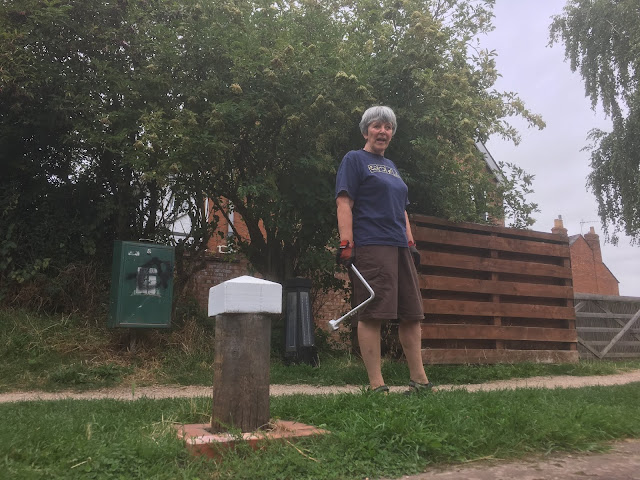 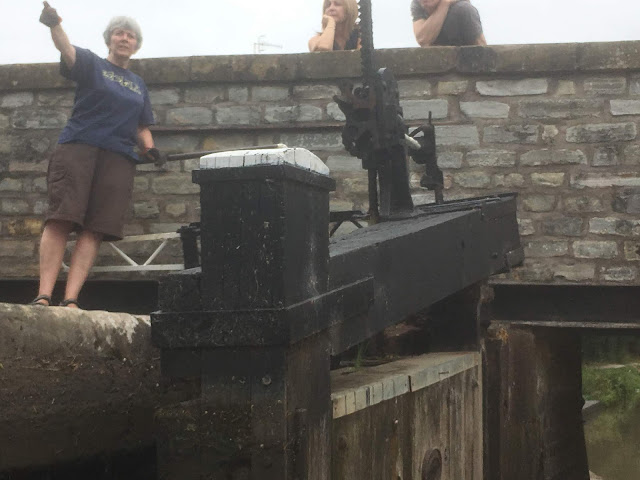 We decided to pass the visitor moorings and moor on the pontoons in Bancroft Basin, which are MUCH more fun! The roof flowers were just ok as we went through the tunnel, and John reversed Annie into a space opposite the trip boat, with a grandstand view of everything going on around us. Hundreds of people were enjoying themselves, on and around ruver, basin and theatre. We tried for theatre tickets, unsuccessfully, so shopped, had Big Mac meals for a change (honest!), watched the crowds, read and watched tv later. 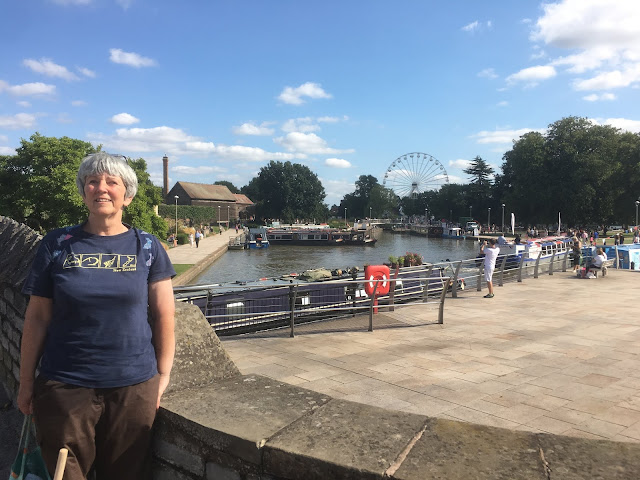 Wednesday 22 August: in Stratford on Avon
We have had a rest day: A walk by the river, Costa, reading, walk around the town, followed by Costa and blogging. Plenty of boats coming through Bancroft Basin, on off the River Avon, including the wide trip boat, which copes admirably as it turns, moors and sets off again.

Posted by Narrowboat Annie at 14:14