Thursday 23 August: Stratford upriver to the Old Bathing Place and then downriver to Luddington (4 ½ miles, 3 locks)

We had a pleasant morning in town. John caught up with our blog in Costa, then bought a week's Avon Navigation Trust (ANT) license for £50 from the ANT boat in Bancroft Basin. A leaflet gave charges and list of mooring places. ANT now charge for mooring at places like Stratford riverside and Evesham Lock moorings, which we think is a bit rich, having just paid for a license.
The trip boat man kindly helped Liana at the river lock, letting her get on Annie in the lock. :)

We travelled ¾ mile upriver to the services at the limit of navigation for narrowboats, the Old Bathing Place. We emptied loo holding tanks and got rid of rubbish there. The water point is not too close to the water, but a hose should reach. On this sunny day, loads of dinghies, motor boats, canoes and nippy trip boats were around, so John had fun avoiding things, including colliding rowing boats and motorboats on the S bends! 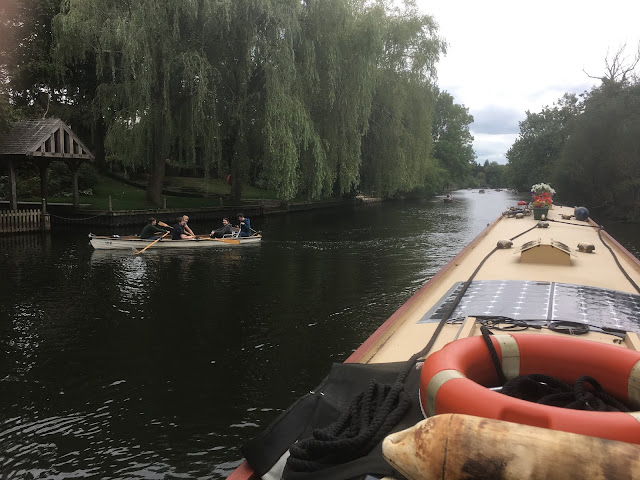 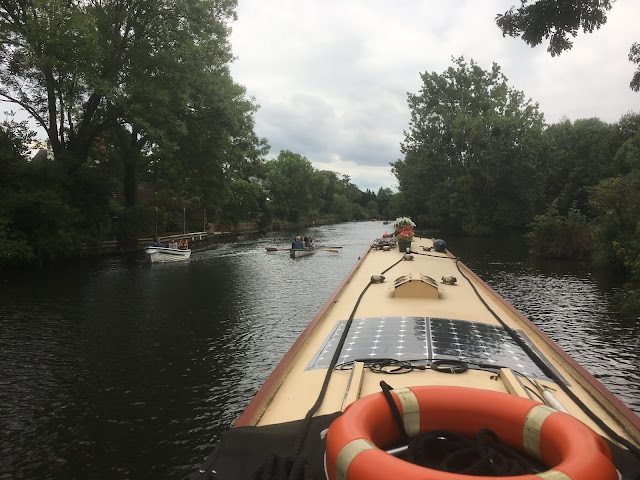 Reaching the tramway bridge, we found a narrowboat across the river wanting to enter Bancroft Basin, a trip boat trying to pass it, plus the big trip boat trying to leave the river lock! John managed to thread his way past, avoid loads of little boats and the little chain ferry which operates most days, crossing the river for 50p by Trinity Church. John let Liana and Ali off before Trinity Lock (the ugly metal C.P. Ritter Lock – they often have memorial names of patrons, too). 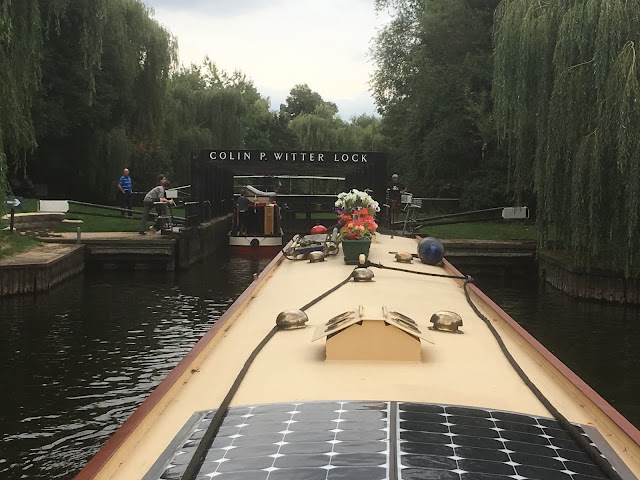 We shared the lock with young actors from the Attic(?) fringe Theatre on NB Lyrebird, admiring the new 3D lettering completed after we watched the masking tape going on the other day. They stopped at Weir Brake Lock (anonymous/Gordon Gray lock) to return to act later, but we had others to help. The two miles to moorings above Luddington (Stan Clover) Lock is pretty: We didn't hurry. We squeezed in between two narrowboats at the moorings, with fenders overlapping, thanks to one of the boaters, who moved as much as he could. The other boaters on NB Latis couldn't move, as they said the owner of the boathouse at the end of the moorings had told them not to overlap his land. Liana watched tv while John had a short circular walk around this small but quite scenic village. There were anumber of thatched cottages and expensive houses: Clearly, not a place we could afford to live in!


Friday 24 August: Luddington to The Four Alls at Welford-on-Avon (2 miles, 1 lock)
We got up early and repeated the walk John had done yesterday. The church was closed, sadly. We decided to head for Welford-on-Avon while it was sunny. Stan Clover Lock was THE lock of the day, but a kind ANT Volunteer, who John had been chatting to, helped us through, as the grass had not grown enough for him to cut. We reached Welford quite soon, and the newish concrete mooring was empty, although it was only about twenty feet long, and only twenty yards from the stone bridge. John came alongside very carefully and used stern and both centre ropes plus the fat fenders to moor the back half of the boat, with the bow sticking out downstream. 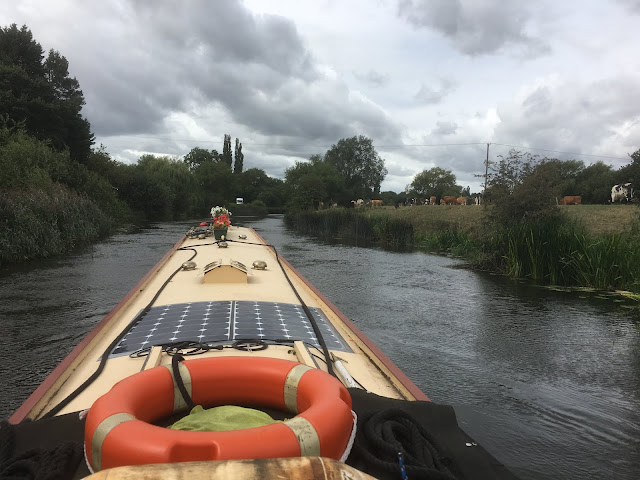 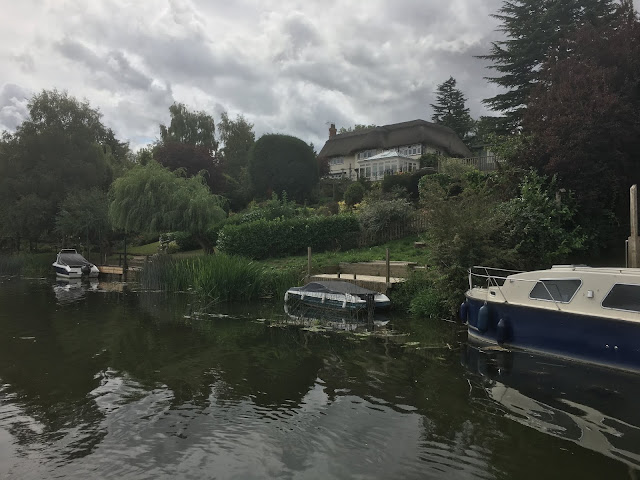 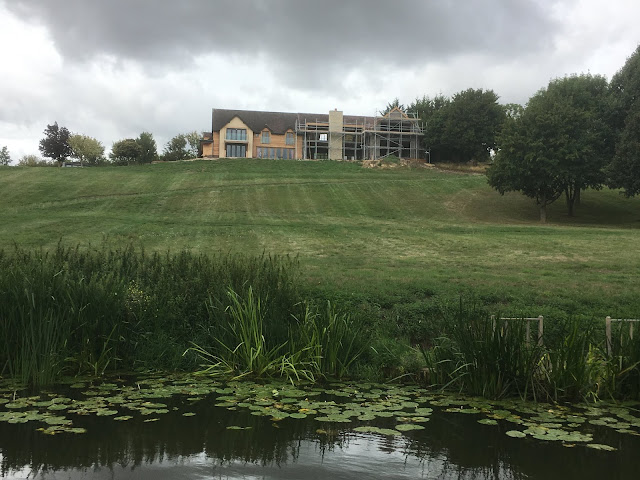 Once he was happy Annie was secure, we found the pub had a wood fired pizza oven: The pizzas were brilliant! The beer was, too. We had a long walk around the very affluent village, with lots of personalised number plates and Porsches. We decided to walk back using a riverside walk, but had to find the path by walking UP a hill! It was bosky but pleasant, and we had to shelter from a shower. Eventually we found ourselves in a field near the sports ground, climbed a fence and found our way back. After toast, we watched tv. 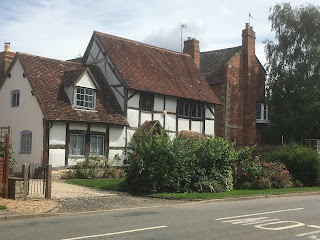 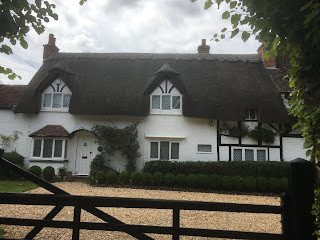 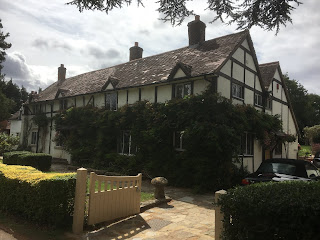 Saturday 25 August: Welford to Bidford-on-Avon (4 miles, 3 locks)
Cool but sunny, we set off early to take advantage of the good weather.

We soon arrived at Welford-on-Avon Lock, helped by a friendly boater. Although the lock island is very close to the village centre, there is no bridge to provide acces to the village, sadly. ANT, Welford-on-Avon residents, here is an opportunity to work together?
At Pilgrim Lock a cruiser was exitting ahead of us, and a narrowboat came upstream and up the lock, helped by Liana and caravanners, who chatted to Liana while Annie went through the lock.
We cruised on to E&H Bullington Lock. As we descended, a trip boat arrived wanting to ascend. The man came with no windlass and no clue, Liana said! Liana and boaters who arrived behind us helped them through. We had a lovely time chatting to every one. Reaching Bidford-on-Avon, John turned and squeezed Annie between two GRP Cruisers, leaving the bow sticking out, until they departed a short time later. Then we moored properly, chatted with a large family having a BBQ next to us, then walked across the old stone bridge into town. John enjoyed watching football at the pub by the church, which has Sky and BT satellite channels.
Ali and Scott arrived, we ate at the pub and shopped at Budgens, using the car. After Scott left, John watched Liverpool FC beat Brighton 1-0 in a hard match at the pub (ok, ok, yes, he admits it, he had a total of five pints!!). We played Settlers of Catan twice.

Sunday 26 August: Sheltering from the rain at Bidford-on-Avon
What a horrid, wet, windy day! John tried the keep fit apparatus close by, but had to dash back/ hobble quickly as more rain arrived. Bidford has plenty of pubs and eating places, plus a decent Budgens foodstore. The Recreation Ground is a good place to moor, with plenty of play equipment for adults as well as for children!We read, watched tv, chatted with passing folk and played Settlers of Catan: Ali points out that she has STILL not won!
A Valley Cruises (“Excellence Afloat”) hireboat arrived at noon, trying to moor going downriver, hitting our bow, making us jump. We helped them moor. Two similar boats arrived and they breasted up together, as they were all friends. We had several pleasant chats with these friendly Geordies, some of whom had boated before.
Ali lost again :( …... but enjoyed her white wine :)

Apart from the odd short wet squall, the morning was cool, windy but mainly dry, so we set off, letting the current turn us as John held the stern rope. Our boat bumping friends followed us and shared all four locks, making life easier and more fun :)
We weren't rushing, enjoying the countryside and riverside scene as we passed through Maricliff (IWA) Lock, Harvington (Robert Aickman) Lock and Offenham (George Billington) Lock. We used the open air Elsan point here to empty four loo holding tanks so quickly that we had finished as our companions arrived! John saw no floating fenders to salvage, and no Kingfishers, though. The moorings above Evesham lock, opposite the weir, looked a biut uncared for, As the ANT pamphlet stated they charge here, we descended the lock, with its attractive lock keeper's house, and moored below the town bridge.
Evesham has loads of shops, plenty of history and things to look at: The riverside, parks, Abbey remains are nice. The Almonry museum is quite small, but excellent (£5 adults, £2 concessions), with lots of interesting stuff to enjoy in this ancient Abbey pilgrims' guest house.

Tuesday 28 August: Evesham to Pershore (11 miles, 3 locks)
We slept in, popped a few hundred yards to LIDL for supplies, passing lots of eastern european grocery shops on the way. We set off after 1100. John held the stern rope while Liana pushed the bow out and let the current do the work turning us. Evesham is quite a pretty town, with plenty of flowers evident. We passed Abbey Park, and complimented an ANT Volunteer cutting back weeds on the ANT mooring near Abbey Bridge, which Pearson's Guide states has water and rubbish bins. Hampton's chain Ferry, a small affair, was moored but not working. Sankey Marine seemed busy, with diesel and boats for sale.

The river through Chadbury Lock to Fladbury is very pretty, with reeds. Lilies, Oaks and overhanging willows. Sadly, there is no bridge connecting Fladbury Lock Island to the village, just a small wire foot ferry, which looked like it is operated from the shore. As there didn't seem to be a village mooring, despite Pearson's Guide 2011 stating ANT were trying to sort one, we had to carry on: A shame, as the village and butcher's sound enticing :(
Two boats emerged as we reached Fladbury Lock, which was helpful. These locks, with their weirs, are lovely to see. Passing Cropthorne, the millionaire's mansions on the left had huge gardens, parks, really! Again, the river is very scenic, and we took our time. John finally saw a Kingfisher.

We moored at the Anchor Inn (48 hr moorings for patrons), Wyre Piddle, after passing Smith's Island and Tiddle Widdle Island! John HAD to have a pint of 'Piddle! He did return it before leaving :P The food seemed expensive to we midlanders.
Wyre Piddle has a nice little church, St Anne's, which was open, plus several pretty thatched and timber frame houses. Piesse of Piddle is a newish wine bar with a good concrete mooring near the Anchor. It helps to have a lavatory sense of humour here!!

We decided to carry on the short distance to the good Pershore Recreation Ground moorings. Wyre Boatyard has pretty much taken over the shore and weir stream above Wyre Lock. Below the diamond shaped lock, is the large mill building, Wyre Mill Boat Club moorings and the ANT offices.
Once moored near ASDA at Pershore, John used more classic wood oil on the wood/resin surfaces in the semi-trad rear. This seems to go on like varnish, which John didn't expect, and improves the tired-looking surfaces. Ali cooked mince & tatties, while Liana watched Tipping Point.

Wednesday 29 August: Pershore to Tewkesbury (12 miles, 3 locks)
Pershore presents quite a pretty face to the world: Hanging baskets of flowers prevail in the streets, where there are plenty of decent shops, including an indoor market next to the ASDA store close by the moorings. We visited the abbey church remains, now the parish church, with magnificent quire as its nave, and a scary ringers floor supported by four wooden beams, a hundred feet above the ground.

Posted by Narrowboat Annie at 10:41