2019 4-11 June: Journey from Crick to Stoke Bruerne, Cosgrove and back to Gayton

Tuesday 4 June Back to Annie at Crick
John dropped off the last planters at primary schools, after our local Gardeners Fayre, run by the Lions Club. We finished gardening, John fed the new swarm sugar syrup, and we travelled back to Annie at Crick, shopping in the local Coop. Liana got wet moving the car, and we settled in for a quiet night.

Wednesday 5 June Crick to Whilton Marina
Breezy but sunny, we set off through Crick Tunnel, meeting just one careful boater on the way through. The moorings overlooking pastures near bridge 9, before Watford Locks, is one of our favourite places, but we reached the top lock to find John had time to empty our loo holding tanks while two boats came up the last of the seven locks. Liana chatted to lock keeper and boaters, then helped operate the locks, including the staircase of four. These work the same as at Foxton, with the red paddle emptying the side pond into the lock below, followed by the white paddle emptying your lock into the same side pond, until both locks and side pond are the same level, when Annie can move into the next lock down.
Braunston locks are closed from 4-6 June, so we met half a dozen boats in the short distance to Norton Turn Junction. We waited for an ascending boat before entering Buckby Top Lock, watched by all at the New Inn. For water conservation, the seven Buckby Locks close at 3pm/4pm (1 hour to get down), and we met a volunteer waiting to lock up as we reached the bottom lock. We moored up opposite Whilton Marina, and John visited the chandlery, looking for clips for the tv mast, to no avail. After tea, John had a walk around the marina while Liana watched tv. We both watched D Day programme later.

Thursday 6 June D Day 75: Whilton Marina to Nether Heyford and Stoke Bruerne (15 miles, 0 locks Engine Hours 3667)
After breakfast in the sun, John readied Annie to leave. The peace was suddenly disrupted by five or six boats arriving to go up the locks, so John got under way to give them room! Compared to some years, we passed half a dozen moving boats as we took our time, enjoying the sun, in between cloudy intervals. Only distant noise from M1 and railway disturbed us. After a while, John had to get a jumper :( 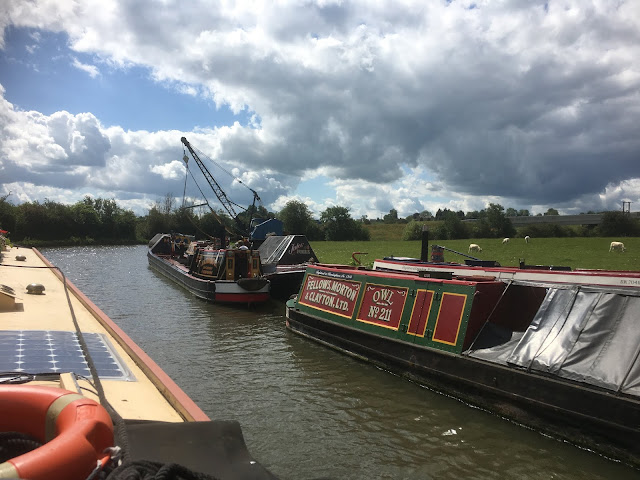 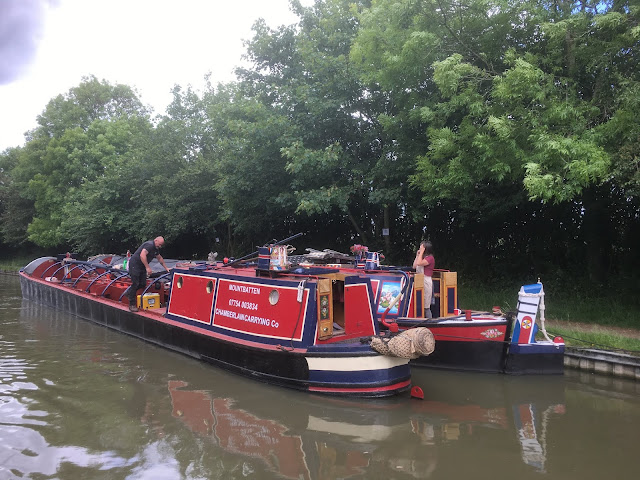 For a change, we stopped for lunch after bridge 32 at Nether Heyford. A short walk found us at the huge village green, where pre-school children were playing sports. We bought good-looking pork & sage sausages, bacon and lamb's liver from the friendly butchers, plus milk from the decent convenience store. We enjoyed a tour of stone and thatched dwellings, plus the church, which had one door unlocked, thankfully.

The new Heyford Fields Marina looks impressive, Two huge new road bridges have been built on this section. Avoiding boats moving around at Gayton Junction, we continued the mile or so through a neat Blisworth Wharf to the 2800 metre long tunnel. A boat emerged as we were about to enter, saying they were the last boat before the Stoke Locks closed for the day. They were right – we passed through without seeing a boat for the first time ever!

Friday 7 June at Stoke Bruerne
Horribly wet, we stayed put today. John did a couple of minor jobs. Liana's sister joined us and we shopped in the NISA store at nearby Roade, visited the museum shop, had a cheap lunch at the Navigation and played Settlers of Catan while hardier souls braved the elements. We had delicately flavoured meals at the good Indian Restaurant by the top lock.

Saturday 8 June  Stoke Bruerne to Cosgrove (7 miles, 7 locks)
Pouring down early on, so we chilled again, reading and catching up on blog (me) and boat log (Liana). A number of hire boats arrived from Weedon and Gayton Junction to descend the locks, driving carefully in the rain. An unabashed liveaboard heading north abused John when asked to slow down. When NB Bluebell followed later, we thanked them for coming past slowly and mentioned this: They recognised the man and the boat, as they had had a similar experience! He must have issues. After lunch the weather improved, so we travelled down the seven Stoke locks and down the six mile pound to Cosgrove, where we walked the short Buckingham Arm. 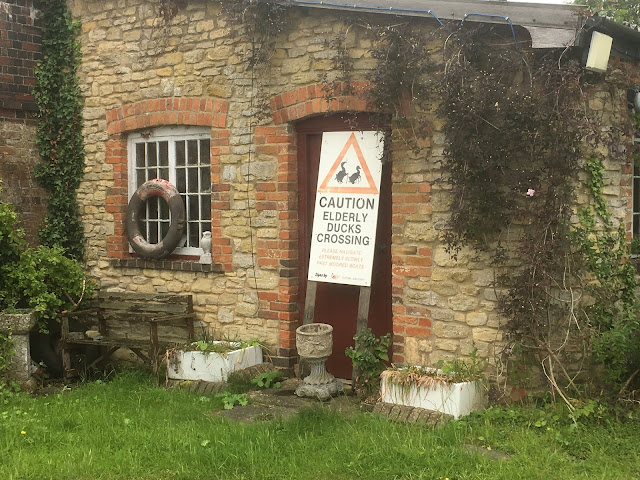 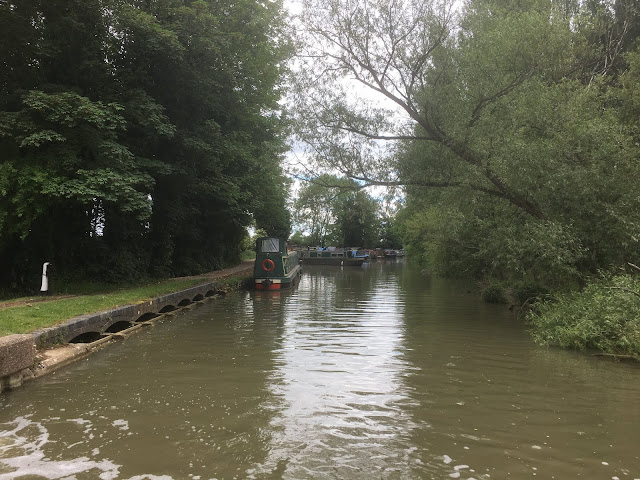 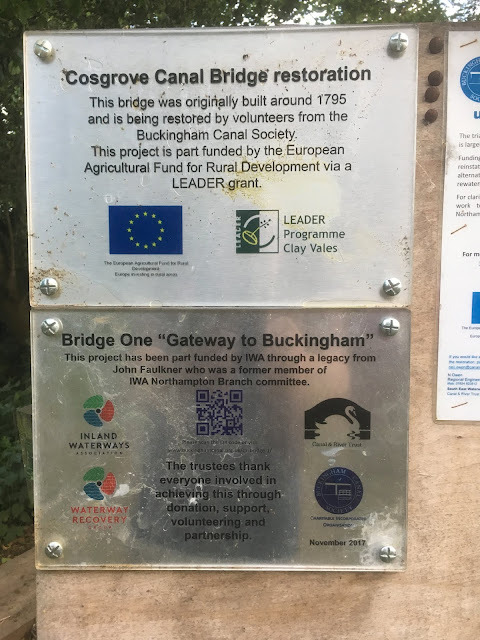 Sunday 9 June Cosgrove back to Stoke Bruerne (7 miles, 7 locks)
Waking up in the sun at 10am (!), our latest yet, after our late night chatting and reading, John counted three, then four bells ringing for the 11am Sunday service at church across the fields. If he had been dressed, he would have gone, rung and attended the service, as there were probably five or six bells at least (not many village churches have four bells, usually 1,3,5,6 or 8. Instead, he had toast and apricot jam! Ali was blamed for being a bad influence :) 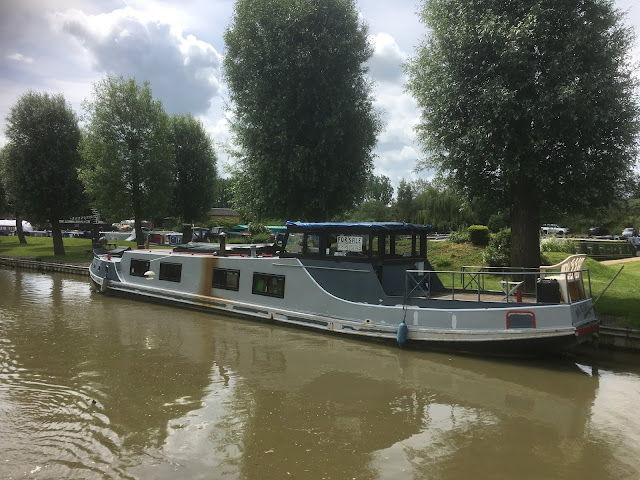 We set off along the six mile pound to Stoke Locks, following two boats and passing a new widebeam with an energetic name, Busy Days. The cool air and breeze did not spoil the lovely views, and John was kept busy as boat after boat passed us heading South. The offside trees stretched half way across the canal in several places near Thrupp Marina (CRT please note), more than a mile in total, making passing trickier. Bushes on corners made sight of oncoming boats impossible at times. John idled Annie past lots of moored boats. We passed the nice couple on NB Joamela for the last time, as they headed South, waving farewell. We had shared locks and seen them on River Soar and at Foxton.

Stoke locks were busy: We worked up with the friendly couple on NB Robis, passing several boats descending, some in pairs. One pair waited in their lock for us both to enter the pound, then were very slow to leave their lock for us to enter – so we got out of their way and smiled! John was told once that the ascending boats normally have right of way, and the descending boats should split and pass either side while we pass straight up the pound in the middle like Royalty – but the best rule is smile and do what you have to, to avoid each other!
Mooring up in the sun, we had a Sunday Roast at The Boat Inn, which the girls found less than wonderful, while John cleared his plate! We decided against puddings, heroically, but weakened outside and had tasty icecreams plus visited the tiny canal shop on that side of the canal. We had coffee and tea in Annie and played “the game” (Settlers of Catan), which Ali won comfortably, when her numbers 2,11 and 12 kept being rolled!!
John helped some German boaters refix their rear fender, using a spare shackle we had. We waved Alison off after she took Liana in her car to get milk from Roade. It is always good to see family and have fun together :) We had a drink at the Navigation before returning to Annie. No boats passed, as the top lock was chained shut, so it was peaceful – apart from the three HUGE noisy dogs who their owners admitted were “chaotic”. Honeypie is so well trained because Rachel attended dog (owner) training classes. Later we read, watched tv and saw Lewis Hamilton win in Canada after Vettel had a five second penalty for baulking him.

Monday 10 June Stormy Stoke Bruerne
Woken by pigeons hooting, John saw one sitting disconsolately on the fence in the rain, which had just started. The weather forecast is showery this week, but we hope to travel in between the showers, being optimistic! Liana is sewing cross stitch, finishing a sampler her mum, Flo, has had to leave due to her failing eyesight. John is blogging, but steak pies at The Navigation beckon! It rained all day and most of the night, with strong winds, too.

Tuesday 11 June   through Blisworth Tunnel to Gayton Junction and the Northampton Flight
The strong winds and rain abated enough for us to set off northwards. We heard that someone had smashed the bottom gates of Stoke bottom lock yesterday, so they would be closed for a couple of days. We passed just one boat in 2800m long Blisworth Tunnel, and idled through the village, past Greenock and Bordesley to Gayton Junction, where we breasted up with NB Osprey at the services, as community boat Mountbatten was loading with elderly passengers for a day out there. Once water and loo holding tanks were dealt with, we moved down the arm to moor opposite Gayton Marina. The weather was dubious, so we walked to the Walnut Tree hotel/inn half a mile away and had an excellent meat platter with a side of home made chips. The food is not cheap, but worth the money :)
Posted by Narrowboat Annie at 13:09