From Nottingham to Newark

Having rung CRT today on 03030 404040 after being redirected from the Newark office by a computer voice, we were assured that the Trent was fully open. Yvonne, the nice lady, even rang us back to confirm this, as I asked her to - but I was still doubtful, even though there was nothing shown in Stoppages, apart from a bit of building at Holme Lock.
No sun today, unfortunately! Cycling back along the towpath to the boat from Liana's mum's near Trent Bridge, we moved down to Meadow Lane Lock and onto the Trent. The canal is looking trendier each time we pass by, these days.

The deeper water let us press on to Holme, Stoke Bardolph, Gunthorpe and Hazleford Locks. Local CRT staff were around on a "Task Day", and helped us through two locks, telling us that they thought the Cromwell Weir was still not fixed. We think messages were passed, as Cheryl from Newark phoned later, confirming this and saying we could moor above the Town Lock at Newark, as long as we were not in the way of operations.
Moral: Listen to the local CRT staff (while there are any!).

John carried on past Farndon Marina and the impressive power station and weir onto Newark Dyke, mooring in a secure area above the lock - so secure that he had to put nav lights and headlight on and cross the cut to pick up Liana when she arrived!

Next morning we were able to get someone to unlock a gate so we could leave the boat until the river is open - next Tuesday, they say ....... :/ 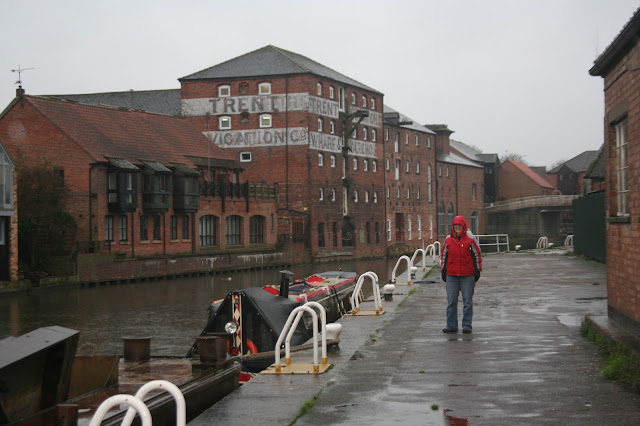 Posted by Narrowboat Annie at 22:12