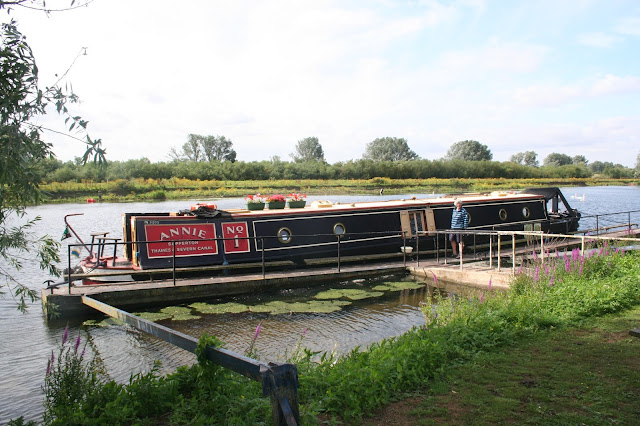 Today High Tide at Earith, five hours behind the Wash, is about 1PM, although there is only a four inch range here (the book says 30cm/1 ft). Apparently the flow is not strong until you near Denver. Hermitage lock keeper James rang Salters Lode lock keeper Paul, who warned us that we do this at our own risk, as the channel is shallow. He asked us to arrive at 7PM but ring him when we pass the sluices a mile before Denver, so he can get Salters Lode lock ready. If early, we must moor on the pontoon below Denver Lock, the only safe place. James thought we should be fine, as Annie does not have a keel, unlike cruisers.
Breezy, with blue sky and some clouds, John caught up with this blog and cleared a loo blockage (nice!), while Liana cleaned the boat side. 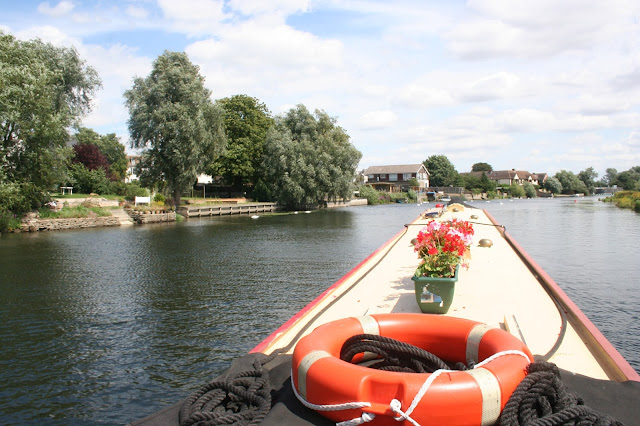 We set off at 1230 and visited Hermitage Lock to check we were ok to go and find out High Water times: about 0600 at Kings Lynn, an hour later at Denver and five hours later at Earith. Working this out, it meant that at 1300 it was about two hours after HW at Earith, with only 10cm tidal range, so the first part of our trip was easy, with a slight ebb assisting us
down the Hundred Foot / New Bedford River, which is about twenty miles long and almost straight, with high banks you can peer over to see the arable crops ripening. 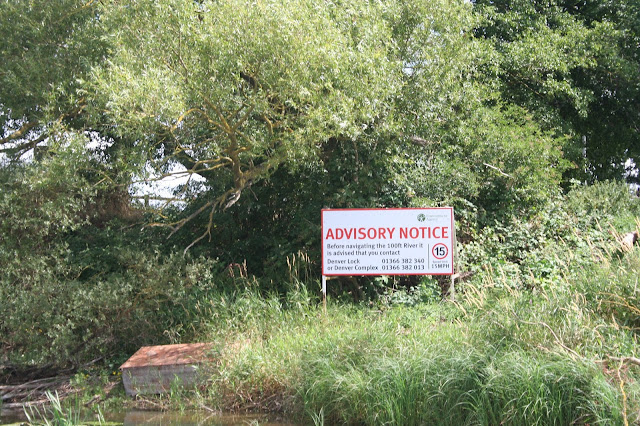 We had six hours to do a five hour trip, so didn't rush. We passed under occasional road bridges near Sutton, with  Anchor Inn and Three Pickerels pub riverside, surprisingly.


There were newer bridges not shown on the map, too, and a railway bridge carrying the Peterborough-Ely line. The river narrowed and the water level dropped at least five feet by 1600, 4PM, 150cm, below HW after three hours, as we reached low water.


Lots of mud and a twenty foot wide channel, with muddy water. I estimated HW at Denver would be about 7PM, 1900, so we were theoretically on a rising tide, but the level was still low and current was still ebbing. Clearly, soon the incoming tide must increase the level five feet in a short time, so we were pleased when the river widened as we approached Welney Lake Slices.


The tide arrived, making the boat rock up and down, and suddenly we were punching a tide of at least four knots! 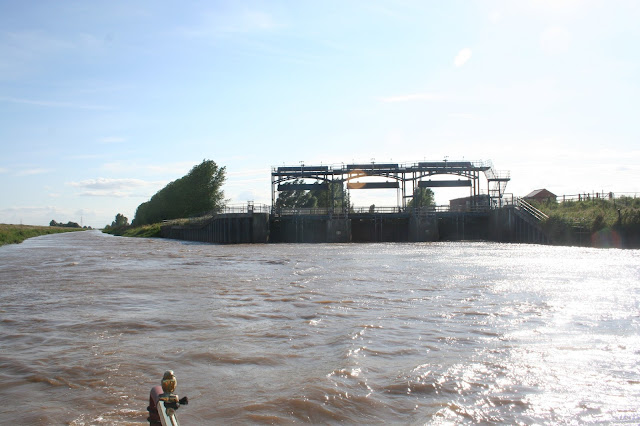 It was a good job we had passed through the narrow section, as the current must be even faster there! Ringing Salters Lode, lock keeper Paul instructed us to moor at Denver, as we were early, which we did. It was almost slack water at High Tide at Denver, so John moored Annie on the lock pontoon, pointing downstream, ready to go.

Paul and a  boater told John that the Denver lock keeper would be along shortly, and he arrived fifteen minutes later. We grabbed a quick sweet & sour pork meal while we waited. We had to wait until the water level at Salters Lode dropped enough for Annie to squeeze under guillotine gate and bridges. Several boats were above Denver Lock, waiting to follow us.

Reaching Salters Lode, the lock keeper instructed us to turn and go straight in, rather than go past, turn and come in against the slight current, so John did, watching out for the poles sticking out of the water on the offside of the short, narrow channel opposite the mooring pontoon. We had to wait ten minutes for the cratch to clear the low obstructions, so had a pleasant chat with Paul, who advised us about the other low Middle Level bridges. 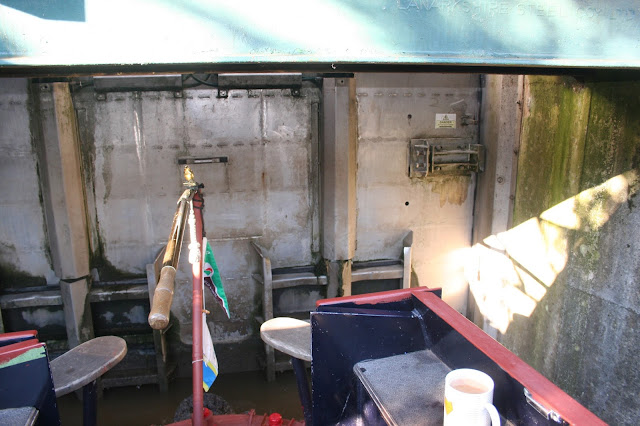 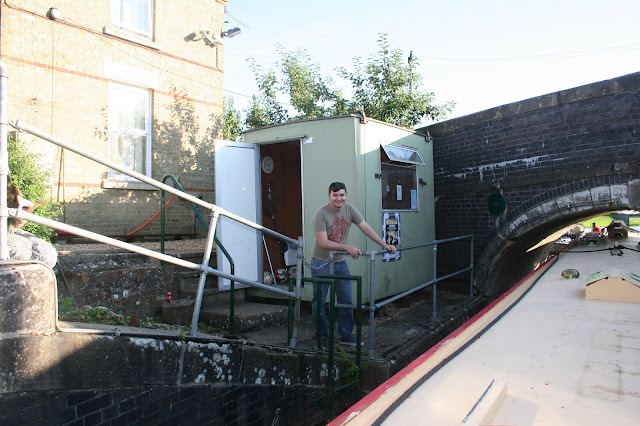 The lock is just big enough for a sixty foot boat touching the bottom gates (you drop down to the fen from the river).


Passing several narrowboats waiting to go as quickly as possible, we moored at Glady Dacks public staithe, a wooden jetty a couple of miles away, about 8PM, cut back the long grass and nettles, tieing up to post, table leg and hawthorn bush: Strange it didn't have mooring rings or bollards, when money had been spent on staithe and strong picnic table. 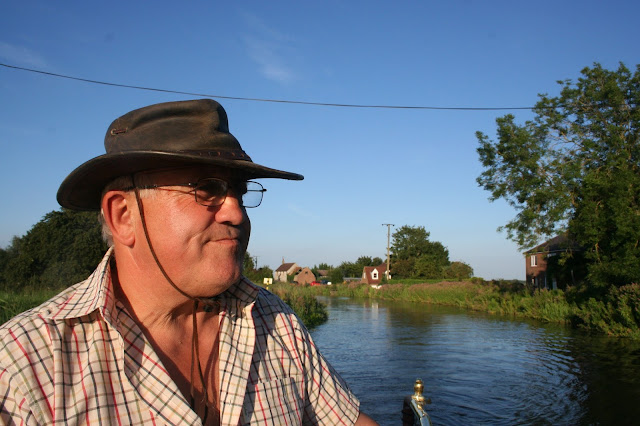 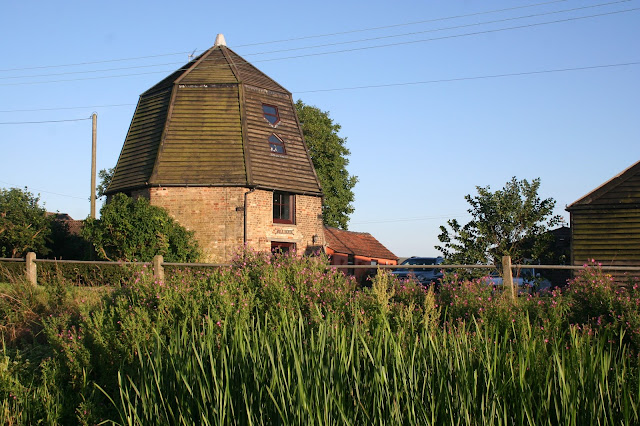 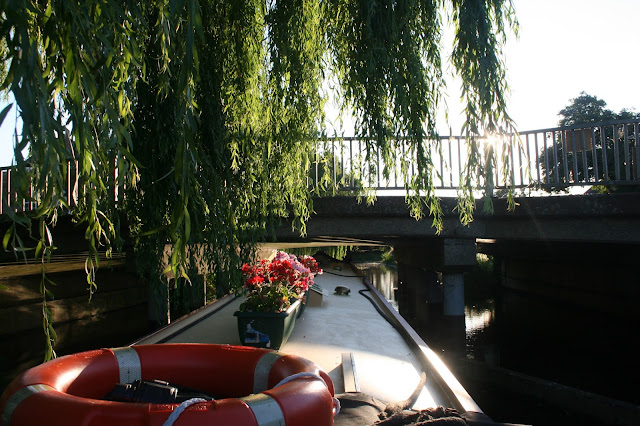 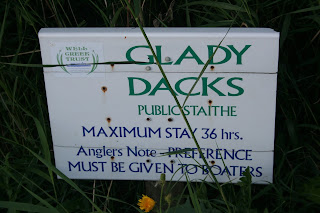 Posted by Narrowboat Annie at 15:26