Sunday 13 October Long Buckby to Watford Crick, Yelvertoft to Winwick Manor past bridge 26 (10.5 miles, 7 locks)
After a rainy, windy night the rain continued all morning. A couple of hardy boaters braved the heavy torrents. It was noon before we set off the three miles to Watford Locks, past Welton Hythe and Welton Haven marinas, boat outposts in a woody, damp, isolated landscape.

At Watford a narrowboat had already descended and was just finishing at the water point below the bottom lock. They started off, then paused: They had forgotten the tap adaptor, something eveeryone has done at some time! Boats were descending, so Liana booked us in with the lock keeper, who let us go up the first two single locks and wait below the staircase of four locks until two more boats had come down them. We took our time, as always, for safety and because we would have to wait anyway. Once he had helped the boats down, the lock keeper left us to go up ourselves, and went to help an American couple ascend behind us. All went well, apart from the wind blowing gates open again, so John had to hold Annie close by the gates to prevent this, until Liana could open a red paddle and start filling the lock.

Once at the top single lock, John popped ashore to swap a couple of books at the CRT block. Then we bade farewell to the lock keeper and set off under the roar of the M1, past meadows to a favourite mooring spot near bridge 9, then on to Crick tunnel.

Like Blisworth, this is nice and straight, unlike Braunston tunnel. We passed through with John warbling tunelessly, to find a narrowboat waiting until we had come out. They then found they were stuck on the shallow canal edge! They got off, and we passed the Moorings restaurant and both Crick marinas, noting there were few boats moored along the towpath this time of year. On we went past Crack's hill, noting plenty of wildfowl, through Yelvertoft, where there are now almost twenty boats moored where once there were none. The sun was still almost out, so we carried on until 5pm past Winwick Manor. By bridges 26 and 27 the canal moves North, so you get the morning sun, so we moored here.

Monday 14 October on to Foxton Locks
Alas, there was no sun this morning, just mist, but no rain, thankfully. John rose early and typed this blog. John checked the engine and added oil and water. It's great to have the engine working well again. A kingfisher flew along the canal soon after we started, about 0930. Two small fish actually jumped a foot out of the water as we passed, to John's surprise.

As gentle rain began, John wore his yellow wet weather gear, gloves and Liana passed out an umbrella. Liana could keep warm inside over the fifteen mile summit level before we got to Foxton top lock. She did some housework and read. John had mushroom soup and a ham and cheese sandwich on the move, while Liana steered. We passed moored boats every mile or so, plus a number of boats coming towards us, more than we usually see this time of year.

There were three boats in Husbands Bosworth tunnel (!) coming the other way, so John waited a minute to let the first one come out before we entered, and passed the others slowly and without incident.

We arrived at Foxton top lock as a boat emerged, and were motioned to come in, but Annie pushed a great floating island of weed in front of her into the top lock! John helped the lock keepers haul it out,
We got down the flight of ten staircase locks quickly, helped by the friendly lock keeper. The others were barrowing the weed away!

It was a good job we decided to moor up outside the Foxton Locks Inn for the night, have a coffee and use their wifi. John dead headed the flowers before we entered the pub, to be congratulated on the flowers (again) by diners who had admired Annie's display. The torrential rain started just after we had our first sip of coffee, so we took our time using their wifi, until they closed at 4pm, when we returned for a quiet night in.

Tuesday 15 October Foxton to Kilby Bridge (10 miles, 12 locks)
Today opened cloudy and damp, but not raining, so we set off to travel the five miles including Saddington Tunnel before the five Kibworth locks begin the descent to Kilby Bridge.
Past Debdale Wharf and marina, and the twisty turns around Smeeton Aqueduct, we sang our way through the half mile long Saddington Tunnel, thankfully free of drips. We saw no bats, which are purported to live there. At Kibworth, some lock gates were hard work to move, and some paddles were also tough to raise: John got off the boat to open and close gates where possible. One or two needed us both to move them!
The farm near Taylor's Lock was still set up with fancy tan wigwams, used as a characterful wedding venue for the last several years, with its scenic lockside location. 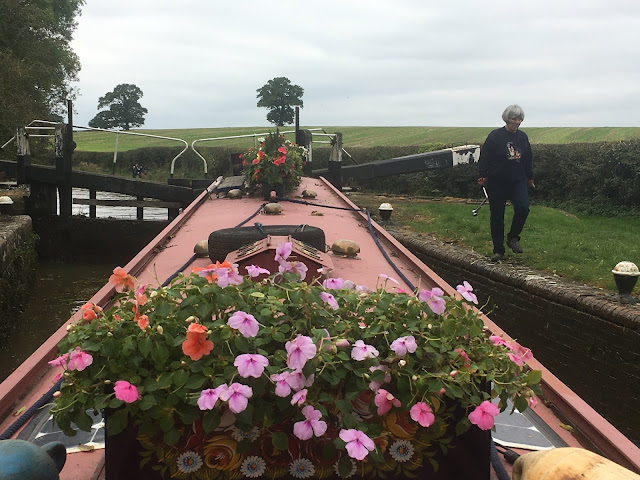 Once through the three locks at Newton Harcourt and the final four locks, we passed the Navigation pub and moored on the 14 day moorings opposite the services. As we had SIX bags of washing, we ordered an Uber taxi to get to family in Leicester, rather than take the bus!

Thursday 17 October the Soar is flooding
The river is nine inches above Norman maximum at Pillings lock. This lock is closed because of debris, apparently, sonde September. I guess it will be closed due to flooding, too. We have driven to Zouch where the flood gates are closed. We couldn’t see the red lights or red amber green level strip so far, but the towpath is flooded below Zouch Lock. There is nothing about this on CRT stoppages, and they haven’t answered my query yet. 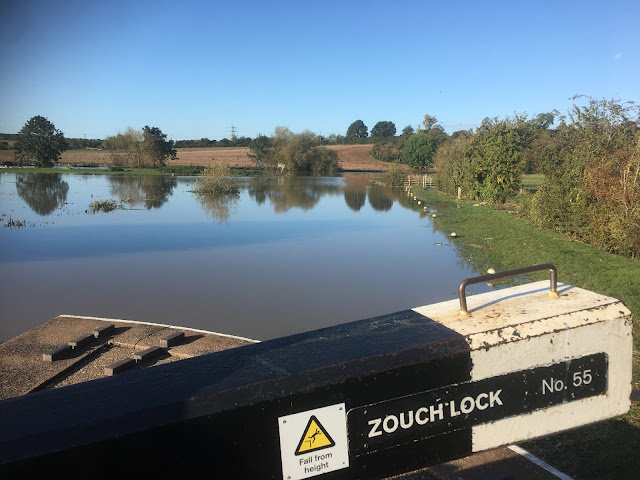 Posted by Narrowboat Annie at 14:37