Down the River Trent to Keadby and Thorne

Wednesday  28 April to West Stockwith, Via Trent to Keadby and on towards Thorne

We were off by 0745 so we would arrive at West Stockwith for 1000. Sorry we had no time to chat to the three Yorkshire boats! We set off quietly, and soon passed the old clay pit at Walkeringham, one day to be a marina. 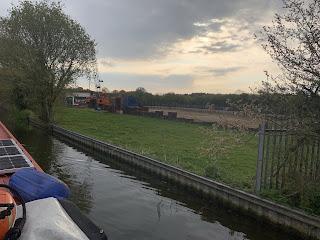 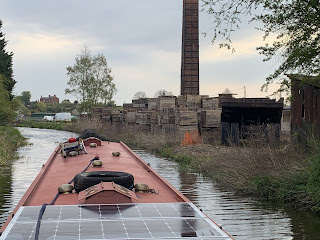 The canal could do with dredging, so we didn’t rush. We stopped briefly at Misterton to visit the butcher close by the coop. 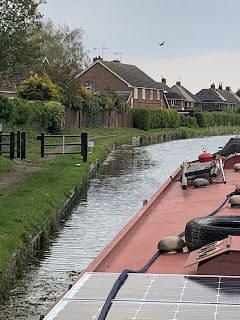 It was cold but sunny, peaceful and picturesque on the way to the two Misterton locks, now repaired but with stiff paddle gear. 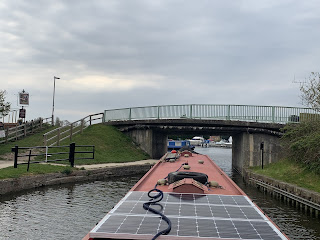 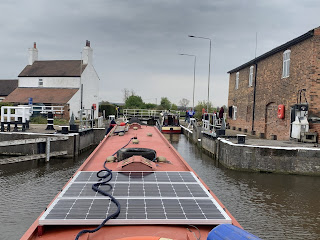 As our VHF radios are not ok, John used his iPhone to check in with lock keeper Jim, who told us to go straight in to the river lock on arrival, where we waited until the tide turned and began to ebb.

We locked down with NB Squirrel Away, exchanging mobile numbers just in case. John made sure his phone was charged and had Keadby lock’s number. 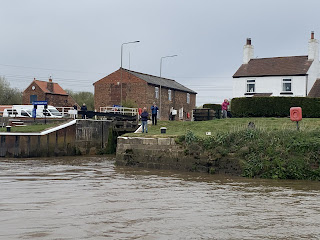 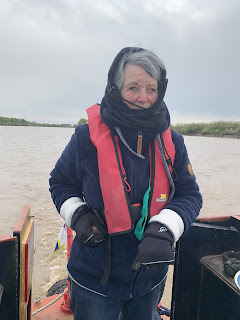 The 2.5 hour trip to Keadby was interesting as usual, although a cold North wind against the ebbing tide made lots of short waves splashing the bow, making plenty of spray. As you leave at high tide, there is plenty of water beneath you, so we stay in the centre of the river all the way through Owston Ferry, the Butterwicks, past the old windmill and through the west side of the huge M180 bridge span. 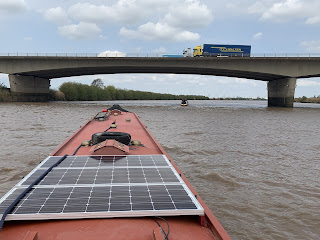 We didn’t rush, 1250 rpm saw us doing about 6-7 knots with the tide, and the we kept a few hundred metres behind Squirrel Away.

Once past the M180, John rang the lock to say where our two boats were and that we would be at the lock in 20-30 minutes. He reminded us to turn Annie against the flow before entering the lock from just downstream. 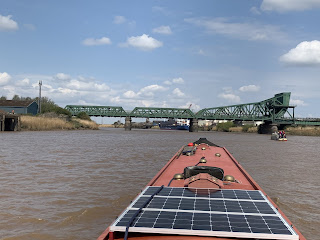 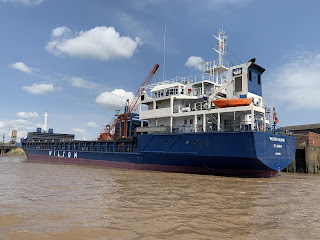 Both boats entered Keadby Lock safely  under the stern of a coaster being loaded with scrap metal. We waited between the lock and the swing bridge until two more boats came up the lock behind us. 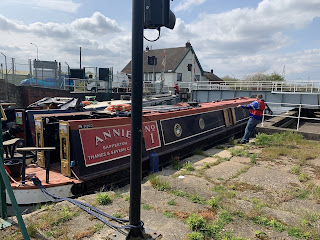 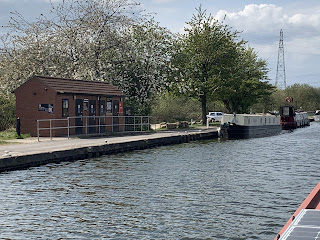 to the famous sliding railway bridge half a mile further on, just beyond Keadby Power Station, currently being modernised. 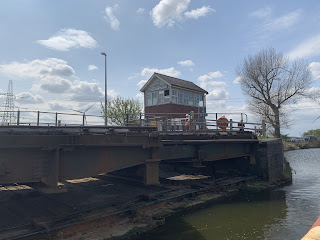 Once red turned to green and the signal box slid the bridge out of our way, Annie and NB Rowington passed through and shared all the swing and lift bridges all the way to Thorne, where we decided to moor peacefully  in the sun between the electric Wykewell Lift Bridge and Thorne town, just before Blue Water Marina.

Today we are having a rest day. We walked a mile into town along the canal, past the boatyard, once Louis & Joshua’s boat building premises, over the large span road bridge, past the good Canal Tavern, through the lovely park to the shops. The town has quite a few shops, although there are many empty premises. John bought some contact cleaner from a motor shop, to clean the solar panel connections. After coffee and a snack, we made our way back to chill and avoid the occasional showers.

Posted by Narrowboat Annie at 12:20