10-14 June 2018: Up the Shropshire Union Canal to Audlem and Hurleston

Sunday 10 June: Coven to Autherley Junction and the Shroppie (12 miles, 2 locks)
Sunshine again! After superb kippers and toast for breakfast, we set off into the flow of boats heading southwards. We didn't need to dawdle or go fast, as turns, bridge holes and the narrow sections around Pendeford Rockin' (maybe ten feet wide with passing places) slowed folk down. 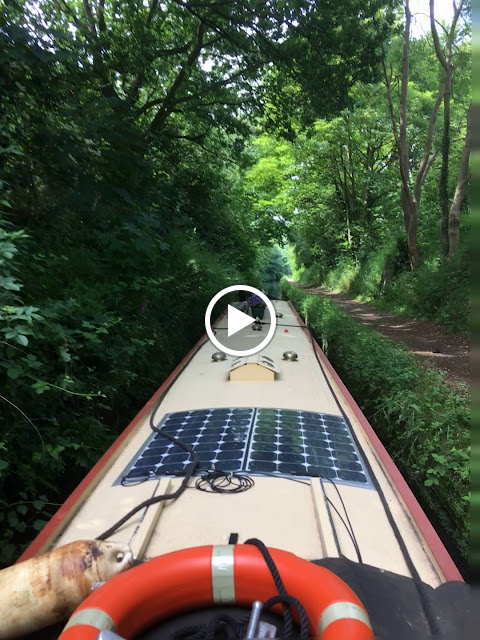 Hard red sandstone meant Brindley's navvies dug the minimum width here. The three miles to Autherley Junction passed pleasantly. We had to wait at the junction for a boat to come out of the stop lock. As John made a very tight turn into the bridge hole for the Shroppie stop lock, a boat travelling North didn't slow down much or try to avoid us, so John zoomed around the corner! Thanks, mate! Boat hirers were being trained in locking by the Napton Narrowboats staff, and John chatted to a gentleman from Welton, near our home, who had been taught by our good friend Karen Lamming: Small world.
Once on the Shroppie, things quietened down. We passed Wolverhampton Boat Club, where members were having a work day. Through narrows with stop gates, we approached the section with embankments (once called “rockings”), cuttings (“valleys”) and narrows. Two nice looking narrowboats (ex-Challenger, maybe) set off 100m in front of us, unfortunately. John just took his time, a good thing when they had to stop quickly at bridge holes, twice! Each time, we reached them as they set off again, tortoise and hare-like. The sun blazed down as we passed Chillington Wharf and shady cuttings to the beautiful view on the embankment before Brewood. Stopping at the Brewood visitor moorings, we enjoyed a walk around the village, which has three pubs, plenty of shops, plus a large church with magnificent Giffard family tombs, two fonts and eight large bells to ring. We had a tasty Sunday lunch at the Bridge Inn before setting off the three miles to the busy Wheaton Aston Lock, where we chatted to boaters and canoeists.  The Stretton Aqueduct needs some TLC, grass cutting and painting. We saw Phyllis May, of Narrowdog fame, at Stretton Wharf,


A mile north, we moored on the long high embankment to enjoy red wine and the afternoon sun. That Shroppie ledge meant the boat was 80cm from the bank, so mooring pins and plank were needed. What a gorgeous, hot day!

On tv, we stayed up and watched an entertaining charity Socceraid match. Neil from Inbetweeners scored the winning penalty after 3-3 at full time! The Canadian GP highlights was the usual boring procession, sadly: Isle of Man TT, and Formulas 3 and E are better spectacles, these days.
Monday June 11: Northwards on the Shroppie to Tyrley Wharf (18 miles, 0 locks)
Good news: Nephew Carson and sons are spending a few days with us on Annie from the end of July :)
Up late, John finished the kipper and blogged, then we set off in the sunshine (again!), through Rye Hill Cutting, Little Onn, Lord Talbot's Wharf to Cowley Tunnel and Gnosall Heath. There were lots of boats going both ways in the bright sunshine – what a gorgeous day! 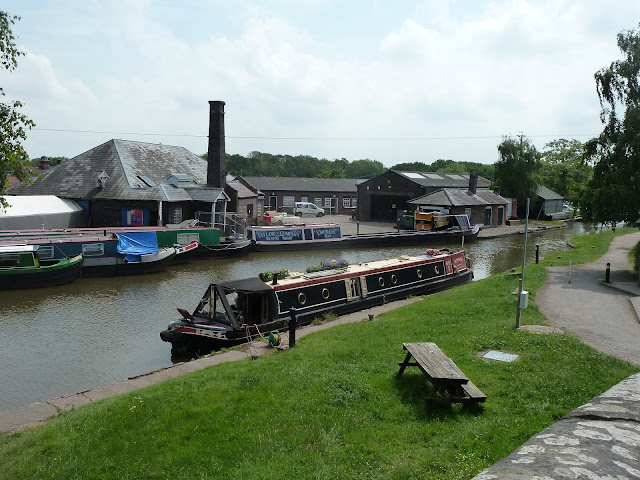 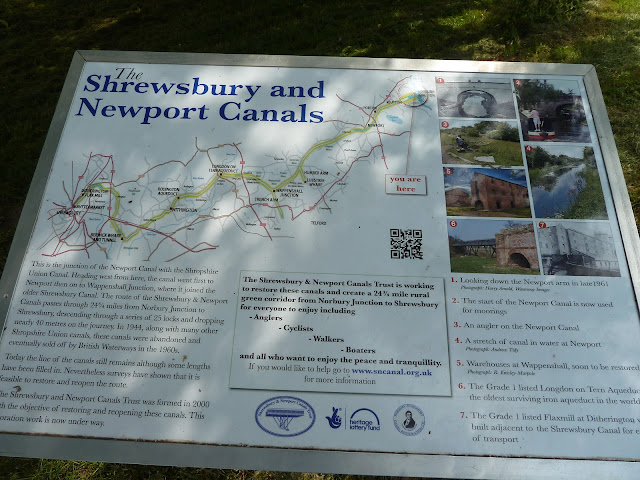 We got water and used the Elsan and rubbish skips at Norwood Junction, colourful and busy in the sun. John visited the decent chandlery to get a brass vent, needed to cover a hole to be cut when fitting hidden plastic conduit pipe for the solar cables and their battery connections. Moving from the services, we had a light lunch nearby.
The wind got stronger on the high Shelmore and Shebden embankments, while the deep cuttings were shady and rather overgrown on the off side – we had to stop in a wider bit to allow one boat through on the very deep Grub Street Cutting, where that telegraph pole still dominates the double arch high bridge 39. John had a call from solar panel sellers while driving!

We had forgotten how many long term moorings there are on this long pound, at Norbury, near the Anchor pub and Shebdon, plus around Little Soudley and Goldstone Wharf. We just relaxed, passed slowly and enjoyed looking at boats and moorings.
Reaching Tyrley at 5pm, as expected, we tied up and chatted on the mobile with daughter Rachel, who was fine, thankfully. John started fitting the solar cable conduit. The new stern gland packing seems superb, with not a drip! John used nappies to dry out the bilge under the prop shaft. Liana cleaned the floor with the steam cleaner. We finished off the Fajitas for tea. Liana chatted to folk by the lock, and John had an interesting chat about eco-farming with a passing walker as he sorted out the back and locked up in the gathering dusk.
Tuesday June 12 2018: Down Tyrley Locks to Market Drayton, then down Adderley Locks towards Audlem (6.5 miles, 12 locks)
We made an early start in the sunshine, meeting a CRT man who had been repainting the cill marks white. 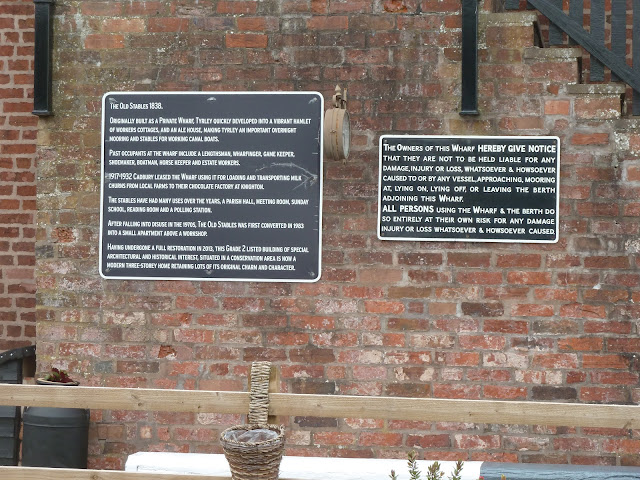 We worked together, lock wheeling. The fourth pound has a shelf next to the towpath, according to Nicholson's guide and notices on the lock gates, so you can't moor, so we let a second boat come up before we descended. I guess we could have passed, really. It is only a mile after the five closely spaced Tyrley locks to Market Drayton, where we could shop. We walked down from the embankment and along a quiet country lane into town, where we shared a big Mocha at Costa, Liana read the Times and John caught up with emails, etc. The town centre is rather nice, with a variety of shops. We visited Wilko and Asda to stock up. Doctor daughter Jo rang to say she had intubated someone who she biked past after an accident! They were lucky! Setting off, Whisky Boats base was unoccupied. We cruised in the sunshine to Adderley locks, through the less precipitous Betton Cutting.The fourth pound had a big ledge, so you couldn't moor.  We expected the locks to be set for us, as boats had passed us, but they must be leaky, as we had to keep topping them up. Passed a boat in the bottom pound, then carried on to the top two Audlem Locks, which were set for us, too. At the top lock, expensive (we thought) cakes and scones were for sale – they looked nice, though! We moored below with other boats on the quiet embankment. We have done 12/25 locks, so we hope tomorrow is fine.
Wednesday June 13: Down the Audlem Locks to Audlem Mill and Northwards
John woke about 7am, sorted out pots, curtains and a cup of tea, then m oved Annie down to lock 3 of the Audlem fight in the sun. It needed filling, so John went down two locks and opened top gates ready for Annie, as these were nearly full. As he returned, other boats were arriving, so in we went! It was another sunny morning, with plenty of walkers. The locks descend through a shady cutting, with water rushing down large bywashes into each pound below. We soon were passing boats ascending, and with (almost) everyone helping, we were past the Bridge Inn and Shroppie Fly and moored after the bottom lock close by the old stables by the winding hole, where John attended a good canal  painting course some years ago. 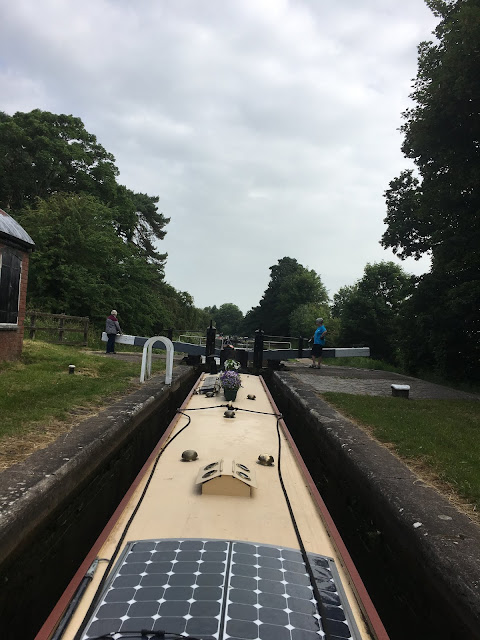 Audlem has developed, with some classy houses and gardens plus more shops. After a pleasant walk round, we had cake and drinks at Number 11 tea shop. The lady replaced Liana's dry cake, but didn't charge for the fresh piece. At Audlem Mill shop, the lady said trade was much reduced as they were seeing ten, not sixty, boats per day because of the Middlewich canal breach. We're surprised, as the Shroppie has seemed quite busy to us. John bought an old book about European Canals, by Hugh McNight, as Liana has been investigating shares in boats in France - ooooooooh!
The solar system is definitely helping the batteries, once the engine has stopped.

Thursday June 14: Nantwich and beyond
After a rainy and windy night, we braved the wind and walked into Nantwich for a coffee at Costa, searching for the wood yard where we could get a wooden batten for the rear cover. The usual impressively distorted Cheshire black and white wood frame houses greeted us in town. 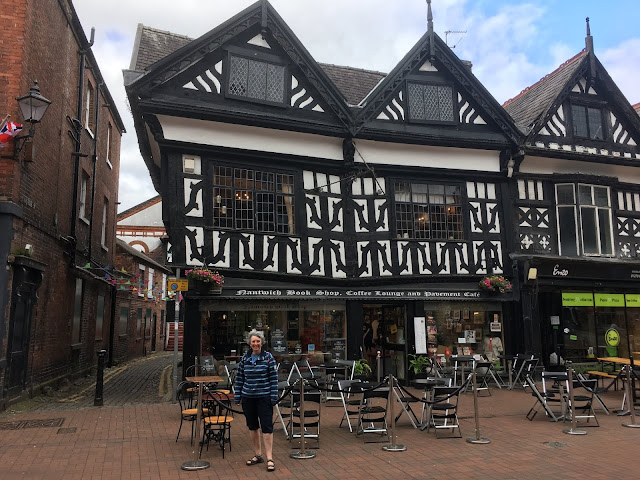 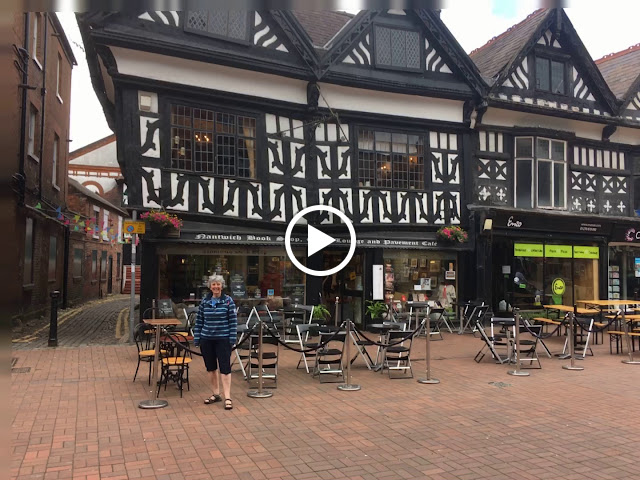 After WHS and the market, we returned to Annie. The wind dropped, so we set off for Hurleston: The wind got up and made entering the bottom lock difficult for John: At least we had remembered to remove all fenders this time, as Hurleston locks are notoriously narrow! Volunteers helped us up all four locks. Apparently, the Middlewich breach has reduced traffic a bit this summer. We moored up soon after and watched the World Cup opening ceremony and first match: Russia won 5-0! Audlem sausages (Shropshire Blue cheese, cranberries and chives – delicious!) were very tasty – we'll buy them again! Springwatch has been good on the tv this year – last one tonight :(

Posted by Narrowboat Annie at 10:15