Monday 4 June: Back to Annie after a successful Lions weekend
John delivered flower planters back to six local schools, together with award certificates and small thank you boxes of chocs for the young gardeners and their supervisors, after our Lions-run Market Rasen Gardeners Fayre. After visiting cuz Karen & Andrew for haircuts, we got bags in car and off finally at 12.30. Visiting mum-in-law Flo for soup and pate on toast on the way, we eventually reached our mooring: The old sat nav needs updating, so Love Lane, Rugeley, took us to the Tesco car park, next door. You need to go out, turn left and left again into Leather Mill Lane to reach the moorings now. Once unloaded, we found a quiet road nearby, Kings Road, to leave the car. The solar panels seemed to have done their stuff: The batteries were 100% with the fridge working :)
Salmon for tea and a quiet night in.
John is trying life without painkillers.

Tuesday 5 June: Rugeley to Great Haywood (5 miles, 1 lock)
Up early, walked to Morrisons via Costa at 8am! Visited Wilko and Tesco to get Liana her quiz books – no joy :(
We idled along, admiring the Rugeley gardens, crossed the Trent aqueduct and reached Colwich Lock, finding ourselves fifth in the queue! Odd, considering we hadn't seen a boat moving! Chilling and chatting made time pass pleasantly. Entering the lock, the engine coughed, spluttered and wouldn't switch off – odd! Reversing the gear seemed to clear it. John checked the propeller shaft, which was clear.
We reached Shugborough at 2pm, moored below the lock and walked to see the Hall and gardens. The Hall was open, so we learned all about Admiral George Anson, who voyaged around the World and gained a fortune (£100 million in today's money) in Spanish gold, and his brother, aesthete Thomas, who was also well travelled and spent the money on the estate! We enjoyed the visit. The rhubarb and sausage roll was interesting in the coffee shop. Fajitas for tea, follwed by Springwatch life and death on tv.

Wednesday 6 June: Great Haywood to Stone ( 9.5 miles, 5 locks)
Liana counted seventeen boats moored overnight, with most moving on today. It was one up, one down at Great Haywood Lock. Boaters were mostly helpful, cheery and chatty. John emptied five loo cassettes at the services Elsan by the Anglo Welsh office at the junction. Liana had an odd fellow who insisted waiting for us to move, staring daggers, when his boat was in a spot behind us, and could move ahead of us. Nowt as strange as folk!

It was a lovely day, and we took our time, waiting our turn at locks, occasionally being lucky and arriving at the right time to go straight in to the lock chamber. 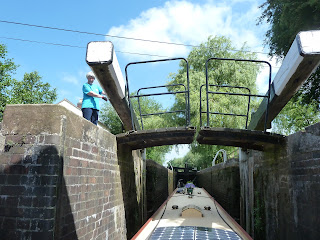 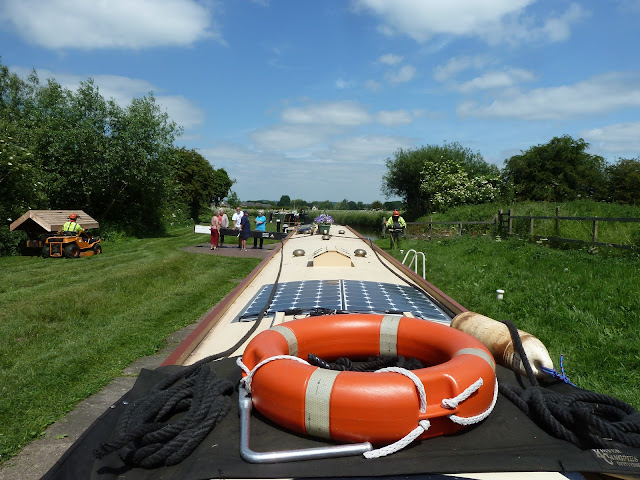 Reaching Stone, we winded just before the Stone Town Lock, moored and walked into town. We visited charity shops and the Dunoon Pottery Shop, a favourite of ours, and resisted buying any mugs. A pint for John went down well at the Star, as did coffee for Liana, but the lock outside was quiet.

Thursday 7 June: Stone to Tixall Wide (10 miles, 4 locks)
A beautiful morning – the sun had charged the batteries right up when we got up. We decided to walk into Stone, buy a coffee and get a bit of shopping before heading South. We resisted Dunoon pottery again and helped at the lock, had lunch and set off.
The weather was fantastic and we enjoyed our cruise. We just took it steady and arrived at Tixall about 5.15pm. After spag bog for tea, we T cut one side of the boat, using microfibre clothes to finish off. It looks better, but we do need a repaint.

Friday 8 June: Tixall Wide to Penkridge (8.5 miles, 6 locks)
From the quiet of Tixall, we journeyed uphill through Tixall Lock and across the Sow Aqueduct, up the Sow and later Penk valleys, southwards. Lots of twists and turns, lots of boats met in bridge holes and on corners, all sorted out pleasantly. We were not hurrying, following a distance behind another boat, and enjoyed the sunny landscape unfolding before us.
The deepish locks come every couple of miles here, but we crossed over with other boats at several, allowing plenty of conversation. We were ready to stop just past the services above the lock by the Boat, and found a place, thankfully. John got down and dirty in his overalls. Using a chain wrench, he loosened the stern gland fittings and dug out the old stern gland packing, what was left of it: It had been dripping badly, recently. Cutting the new greasy packing into three pieces which just fit around the propeller shaft, he had to hammer each flat and shorten it to get them in! Once in and tightened, there wasn't a drip! For a change, we had well deserved and rather nice burgers at the Boat, then returned to Annie to rest and read.
David Suchet (supporter of the Lichfield & Hatherton Canal restoration) was Poirot on the Blue Train, which we enjoyed on tv.

Saturday 9 June: Penkridge to the Round House at Gailey and the Anchor moorings at Coven (6.5 miles, 6 locks)
If you walk west past the Boat on the Cannock Road half a mile through the town centre and turn right at the main road, you will find the large Saturday Market. This has loads of clothes and plants, plus tools, food, meat and fruit stalls: Well worth a visit. John bought some wonderful huge Peterhead Kippers from the fish man, full of bonhomie; microfibre clothes for Annie's paintwork; plus fruit and pliers. From Penkridge, we continued past Otherton Haven and the M6, up six locks in the sun to Gailey, where we stopped opposite JD Boats, whose breasted up boats left barely enough room to get past on this narrow bit of canal when people used the visitor moorings – less than thoughtful, we felt. 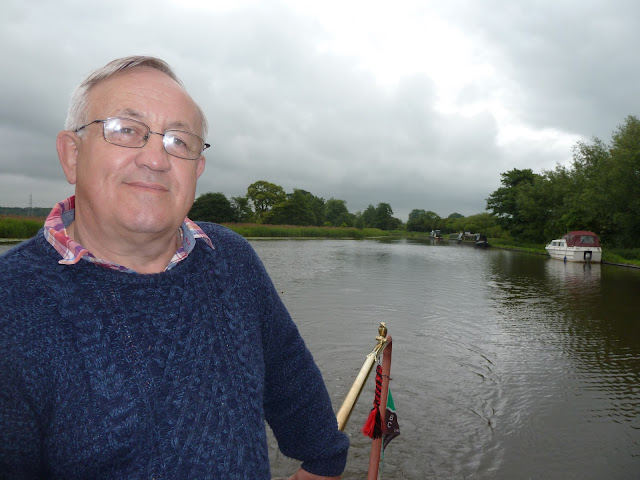 It was lovely to speak to Eileen at the Round House shop. John bought new editions of Pearsons canal guides for Welsh Waters and the Leicester Line & River Nene (the Nene is newly included), plus some lovely little canal books from the well-stocked shelves. Her garden looked beautiful, too. 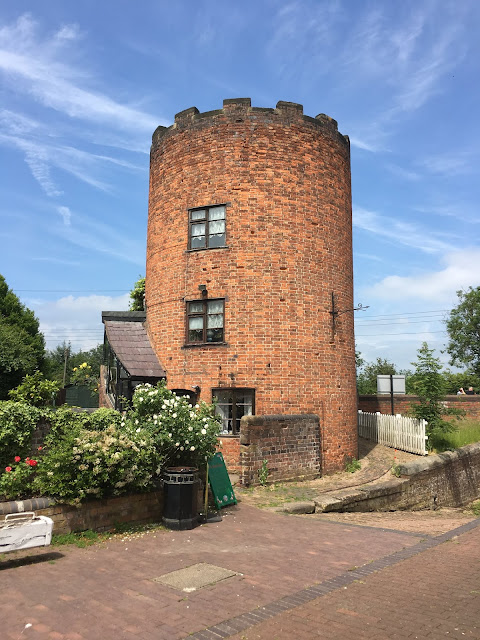 The countryside was also scenic in the sunshine, pleasant despite us skirting railway and M6 at times as we motored along the long pound southwards. John checked the packing wasn't making the stern gland overheat, at one of the locks. No Kingfishers were seen, but plenty of heron and other wildfowl. John felt like a pint, so we stopped at the Anchor at Coven about fourish. The stern gland was still cool, so all was well there. The Anchor is now a decent Vintage Inns pub with reasonable food, but we finished off the spag bog on Annie, drank wine,read and watched Canal Journeys in Ireland.

Posted by Narrowboat Annie at 10:14