8 May 2015
Left the car in the car park next to the CRT Office and Grand Sluice at Boston, then cycled past the Gateway Marina the five miles back to Langrick Bridge, a pretty journey. We stopped half way to talk to the CRT Grand Sluice lock keeper Sam Brockett, who was checking Anton Gowt Lock. He advised us to moor at the Packet Boat Steps, if we went to the Maud Foster Drain. We took his advice.

There are two visitors pontoons at Antons Gowt, either side of the lock, but one seemed to be used by local sailing boats. This is a first - locking down from the river. The offside bottom gate was too much for Liana to close once Annie was out, so I had to tie a bowline in the stern rope and help. The only way for crew to get on board safely is for the boat to hover next to the long steel ladder below the lock. 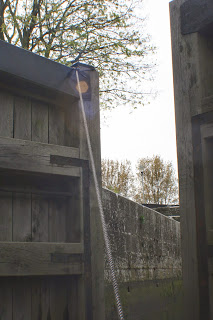 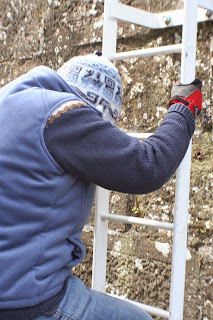 Next we turned North up the Newham Drain, towards New York! After removing the chimney and passing through a tight corrugated bridge hole, we had to stop just before the village at a 5'6" farm bridge just before New York (as shown in the Richlow guide) and back up before returning through that tight bridge hole. 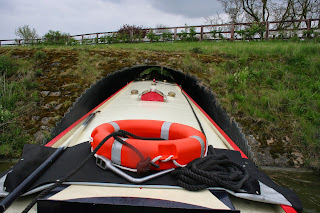 We aimed for Frithville, but had to stop and dismantle the cratch to get below the road bridge on the way. I think Annie is a little high, having pigeon boxes on top and being built for two 6'2" gentlemen. 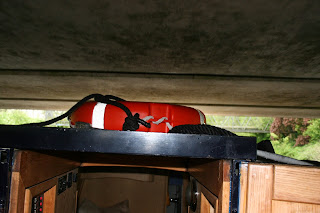 Turning South we reached Cowbridge Lock, to go up onto the Maud Foster Drain. There appeared to be no pontoon (more later), but one bottom gate was open, so I edged in and Liana scrambled up from the gunwhale. The bottom gates could be opened by pulling on a chain, and clipped open. to get onto one side. There was one rather agricultural but ok bottom gate paddle. Liana had to remove a chain, go down steps and duck under a metal fence. On the other side, we were yards from a golf tee, and chatted with the golfers! The guillotine top gate was ok, but you need a CRT key, then push the permanent windlass slightly to help you move the hinged locking device, so the  gate will lift. Once out, there was no pontoon visible, so I reversed close to the top gate and helped Liana climb down onto the boat. You need to be fit! 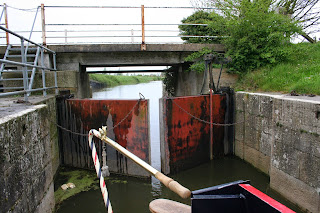 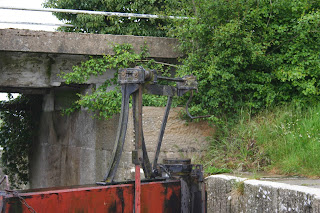 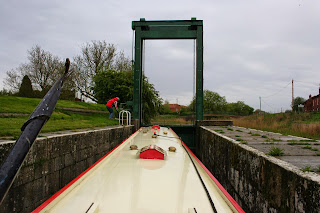 Posted by Narrowboat Annie at 11:06