Friday 15 May
A lovely but breezy start to the day saw us leaving the car at Tattershall Bridge and cycling with the wind to Boston ..... yes, it impressed me, too! This involved using a fairly quiet country road parallel to the Witham 7/8 miles to Langrick Bridge, after which the last 4/5 miles were along the cyclepath again. We don't rush, we just enjoy the scenery and keep pedalling, so the miles roll by :)

After passing the time of day with friendly boaters, then preparing the boat as usual and having a snack, we set off, watching out for several young rowers from the nearby Boston Rowing Club. The strong wind was against us and it took time getting diesel at Langrick Bridge (incidentally, the only place to get it near Boston at the moment). The new pump was slow, so we had a coffee with the very pleasant lady in the shop/chandlery opposite, and discussed air locks in the fuel line with the amiable guys at the garage and pontoon. This meant we arrived at the car later than expected. This quite scenic passage past Chapel Hill moorings and the Bain at Dogdyke, with our eyes searching the skies for the Battle of Britain Memorial Flight planes and the modern RAF jet fighters, cormorants, herons, swans geese and duck families, is full of interest. We squeezed in behind NB Panacea to overnight at the Tattershall Bridge moorings. 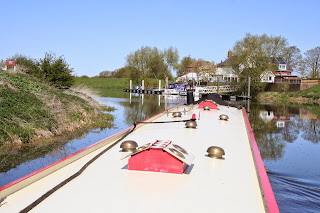 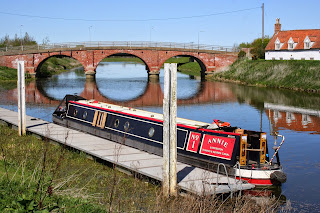 Saturday 16 May
Got up late, feeling idle, watched Panacea turn and leave for Boston. Liana decided after breakfast to drive the car 4 miles to Kirkstead bridge, read her book and wait for me. When I arrived, the two pontoons had several boats spaced out, so we quickly decided to pop the stern in to pick up Liana and continue to Bardney Lock together. The sun came out and breeze died a little. A keen photographer busied himself as we operated our one and only lock that day. Some one had clearly been busy up river, as lots of islands of sedge were floating down and blocking our exit from the top gates. We pushed our way through and moored on the visitors pontoon, furthest from the lock. I checked the prop, and was glad I did, as there was some plastic webbed textile around it. Put boat to bed, chatted to the very nice liveaboard couple residing there, he with strong Scottish accent and flyaway beard, and cycled back to the car, via an icecream at the pub at Southrey and a pint at the Railway inn at Kirkstead Bridge! It's a hard life ..... :)