Wednesday 9 August on to Trent Bridge and Nottingham (4 miles, 2 locks)

We got bumped by a careless boater trying to moor next to us In the dusk at Holme Pierrepoint, John did Not sleep well, for some reason, but we set off once the dark skies became blue and the sun shone. 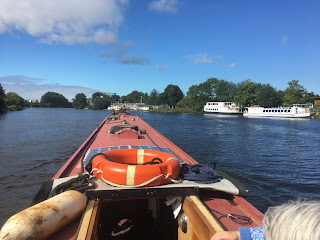 A rower kept us company, while people waved from the bank. 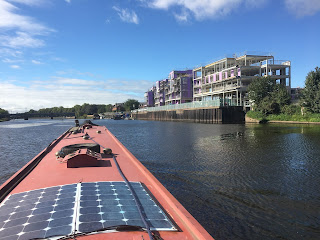 Reaching the lock, we found the pontoon occupied by a CRT crew renovating it. We were the third boat waiting, so two of us breasted up on a pontoon just past the lock. Then the boat that bumped us, NB Sleepy Jean, arrived. The CRT crew let them moor with them while we reversed and entered the lock with NB April Fool. 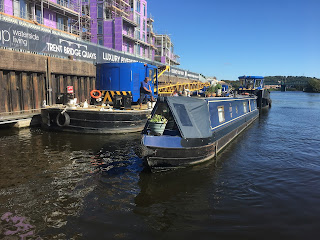 Liana had to ask a live aboard boater to move his boat along so we could use the services. Once loo cassettes we’re emptied and water tanks filled, we continued beside the London Road, which most people don’t realise is twenty feet up above the old water meadows. Four boats were moored along this stretch, using old rings, so it must be getting better here. We passed a motorised raft type trip boat, too! 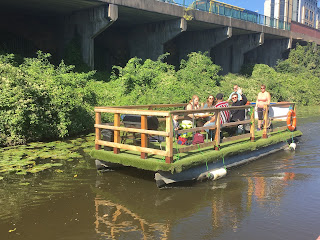 Turning the sharp corner, we operated Castle Lock and passed all the new buildings before and after the old canal museum and magistrates court.

After mooring in our usual spot near Sainsbury’s, we lunched and Liana biked back along the towpath to see her mum again, while John did boat jobs.

Posted by Narrowboat Annie at 21:01