As we left our blacksmith friends Brian and Jane Greaves plus the attractive village of Hopwas behind, red flags and dull thuds warned of live Small arms firing on the nearby army rifle ranges near Hopwas Woods and Whittington Barracks, home of the RAMC. 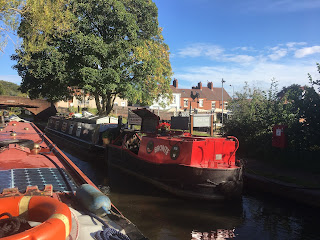 Weedy harvested fields preceded Whittington, after which the bridges are numbered by the Trent & Mersey Canal Company, not named in the Birmingham & Fazeley Canal tradition. Apparently these two companies built this link between Fradley and Fazeley because the Coventry  Canal Company investors  had thought it against their interests to do so. 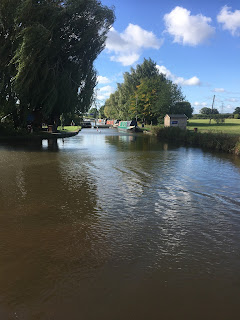 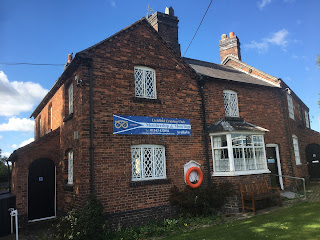 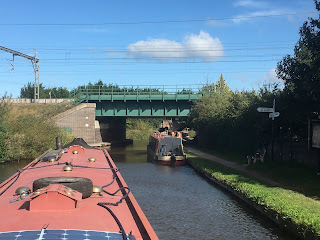 At Huddlesford the new mainline rail bridge passes close by the Lichfield Cruising Club moorings at the junction with the Wyrley & Essington Canal, currently being restored by the Lichfield & Hatherton Canal Restoration volunteers. 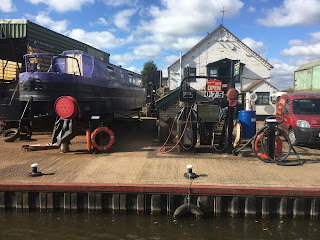 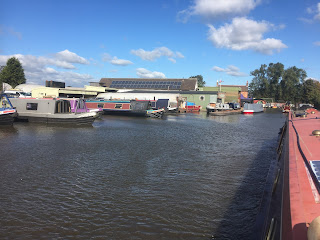 Fradley South continues to expand across the old aero drone. At Fradley, four boats passed through the swing bridge. Delhi and Annie moored beside the Swan waiting to descend, while both Jan and Liana helped boats ascend Junction Lock, too. Once down, we used the services by the canal side cafe, then carried on down the locks, helped by volunteers. Two miles and five locks from Fradley Junction, we moored up by pedestrian bridge 47 in the middle of Alrewas (pronounced Alrewuss). All four of us went shopping at the nearby local coop and reputable butchers. John bought South African Boerewors sausages to try!

We had a lovely late afternoon and evening, catching up with visiting lifelong friends Michael and Wendy Scott. They dressed for warmth and sat in the cratch while we sat inside, in best socially distanced style. The local Chinese take away supplied an excellent meal for us all, our first such meal for many months.

Posted by Narrowboat Annie at 17:04