Through Leicester with Rachel and Pip

We started with a walk around the park lakes in the sun.  Plenty of families, joggers and bikers were making the most of the good weather.

Liana and the girls organised collecting and leaving cars, after which they joined us for the day. 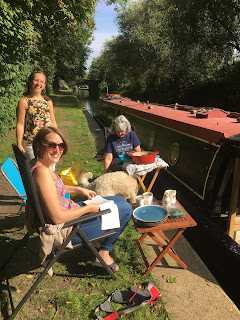 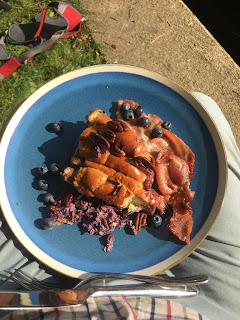 Rachel came to the back while Pip was on the cratch, and Vice versus, so we had time to catch up and hear about their jobs etc, which was lovely.

The scenery became more urban as we passed through Thurmaston and Birstall Locks. The National Space Centre looks like a plastic blowup version of the London Gherkin!

Past new housing, and cleared spaces, we passed new pontoon moorings near Abbey Park and the Golden Mile, plus at Friar’s Mills. 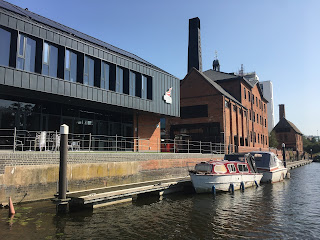 Under West Bridge we passed the decent secure Castle Park pontoon moorings. Your CRT key fits both the moorings park gate and one of the park gates onto the street, so you have free park access. 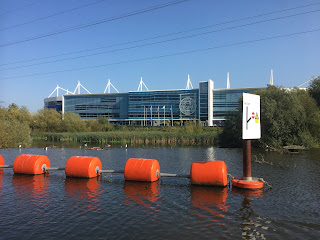 Aylestone Park is another Soarside amenity which is well looked after and appreciated by the local population and boaters. We often moor above the lock here. Today the girls went for cars and returned to us after we moored on excellent bollarded moorings below King’s Lock, a little further on, by Packhorse bridge 105 and the nearby Black Horse pub.

We had a delicious Middle Eastern style meal, courtesy of Rachel. Yum!👍

Another lovely blue sky day! We chatted with passers by as we went up King’s Lock. 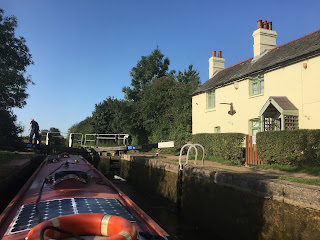 John did not rush as we enjoyed the morning. At Blue Bank Lock, Liana had to forget social distancing as she hauled out a lady who had slipped and fallen in the canal from slippery steps. Thankfully, she was fine, just wet, although her phone suffered. It reminded us to take care, ourselves.

Above Gee’s Lock the channel was very overgrown, but luckily we met several oncoming boats after this, at Glen Parva, where the back gardens were often very neat and impressive. 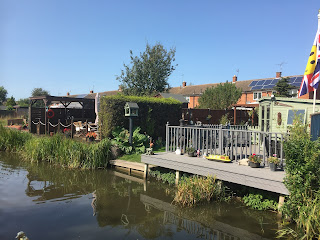 Liana ran both the dishwasher and washing machine as we went along slowly. Leaving the town behind, we looked for somewhere rural to moor, before Kilby Bridge.

Below Double Rail Lock 31 ( the extra rails were put in after an old lady fell in) there are good pilings with armco, and the scenery is pleasant and rural. Dog walkers and joggers from nearby South Wigston pass by. We erected a nautical washing line, made from our boat hook, boat pole and a mooring rope,  to dry our washed clothes in the sun. 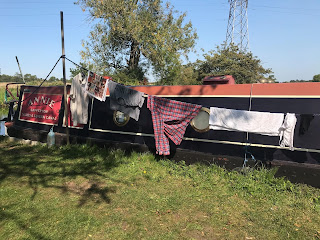 It was so hot, Liana burned her knee on the side of the boat!n 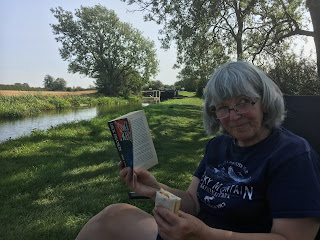 Even better, Rachel popped over with Honeypie for an hour after our tea and before hers.

Posted by Narrowboat Annie at 08:41