Condensation greeted us this cold morning, although blue sky shared the heavens with high white clouds. NB Leap Of Faith passed quietly at 0730, while John was cooking his fried breakfast. After doing a few boat jobs, we eventually set off about 1000, taking our time. The cool wind meant wearing jumpers, although the sun was warm when you were in it! Soon we approached the cutting and tunnel at Husbands Bosworth, 1170 yards long. 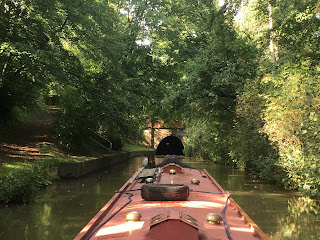 Thankfully, it was dry and we passed through it alone, singing along (if our efforts can be called that).

North Kilworth now has a massive new marina opposite the old wharf, and we assume this is one reason why we have passed so many moored and oncoming boats since Foxton.

A narrowboat paused to let Annie through the junction with the Welford Arm, before she turned North. Here, the infant River Avon, Shakespeare’s own, comes from Welford Reservoir.

Eight miles of twisting, country contour canal wind around the low hills on the way to Yelvertoft village and marina. Between bridges 23 and 22 are scenic south facing piled moorings.

Around Crack’s Hill, which is easily accessible, with topograph and beacon on top, we passed Crock Marina., which adjoins the base of ABNB, from whom we bought Annie six years ago. How fast the time has gone! 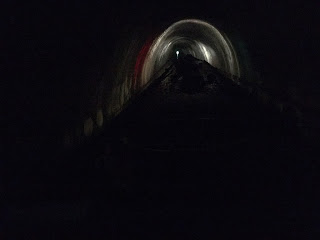 The long 1528 yard, 16 feet wide Crick Tunnel dripped on us and two oncoming boats passed us inside. The second had a poor headlight and was wobbling about, so we slowed to a crawl. They managed to get past without a bump, but slewed across the tunnel once past. Once through, we passed under the main rail line to moor in one of our favourite places, near bridge 9, facing the late afternoon and evening sun. 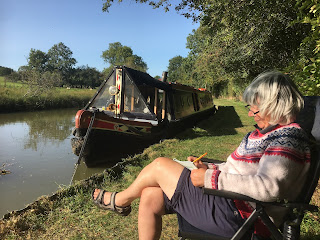 We sit here with glass of red wine, feeling the warmth as we look across at the sheep pasture. Bliss!
Later, we played Settlers of Catan with Rachel and Pip, online using Zoom. John should have won, but missed his chance, and Rachel won yet again! We are also rereading some Dick/Felix Francis novels, enjoying the old-style plots.

Posted by Narrowboat Annie at 15:46