John cooked himself breakfast and made tea while Liana slept on. We had plenty of time to travel to Sykehouse Lock before 9.45am. John wore his waterproofs as it drizzled occasionally. 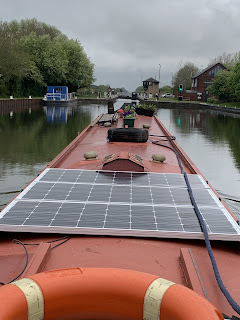 The light turned green, so we entered with NB Down the Hatch again, plus a widebeam CRT workboat. 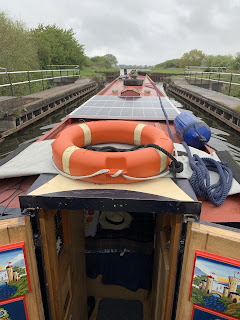 Once through the historic Went Aqueduct, we saw bad bank piling collapsed on the left before the junction with the Aire & Calder Canal, where there is a vast reservoir/sailing lake/ nature reserve which supplies water to this end if the canal and Goole Docks. 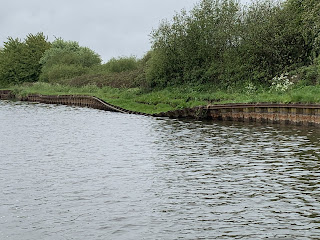 On the way to Pollington Lock we passed half a dozen places with pilings collapsed. We had an hour to wait before noon, so chatted to locals and the friendly couple on NB Down the Hatch again. At the lock, local walkers told us that the collapses had followed passage of large fast barges, followed by lowering the water level by more than a metre. 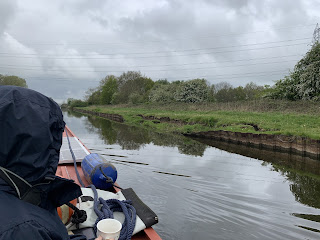 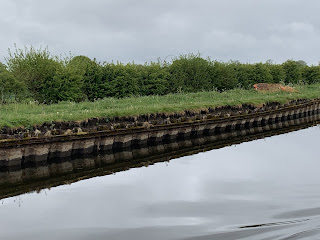 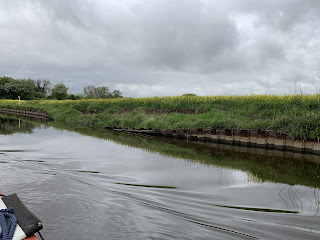 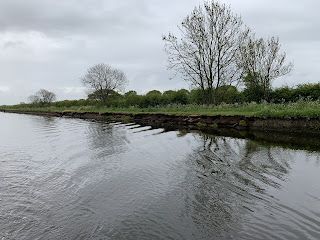 The lights turned green just as we all took our first bite of lunch, so we went in. The water came in quite violently, so Liana could not hold on to her bow rope, so we touched the other (new) boat, thankfully gently.

We stopped for lunch on moorings above the lock and listened to the schoolchildren playing nearby, after which we continued on an embankment above the flat arable fields, some bright yellow with oil seed rape, to Whitley Lock.

There is a pleasant mooring with chestnut trees below the lock, but we continued through, then under the noisy M62 and on to Knottingley. Liana was cold, so stayed inside and “attended” her first RWBC Zoom meeting as a committee member using her IPhone.

John moored at the visitor moorings opposite Harkers Boatyard, at the junction close to Bank Dole Lock. He had a long chat with the passing water bailiff, who had lots to say about gravel boats travelling fast and killing fish, plus causing boat damage to cruising boats and cafe boats. The mooring itself is tidy and ok, apart from the low hum of fans from a nearby factory, which might bother some folk.

After her meeting, we walked over bridges and used the towpath to visit the local chippy, half a mile away. Freda’s Garden is actually a hundred yards or so of towpath, full of perennials and now looked after by a local group: Well done!

The food was ok, but we finished off the egg Mayo sandwiches, too! No tv reception, so John read and Liana did her puzzles and phoned family.

Posted by Narrowboat Annie at 06:40