To Ferrybridge and upriver

Saturday 15 May up the River Aire to Castleford (8 miles, 2 locks)

John woke up early and wrote up the blog while finishing a bun with egg Mayo breakfast. With overcast skies threatening rain, we set off steadily, past Freda’s Garden, the Steampacket pub mooring and out of Knottingley. Soon we arrived at Ferrybridge Flood Lock, in the shadow of power station, motorway bridge and the ancient three arched stone bridge which once carried the Great North Road over the River Aire. 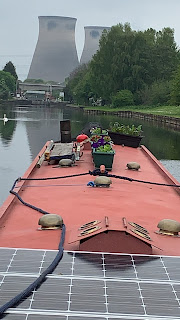 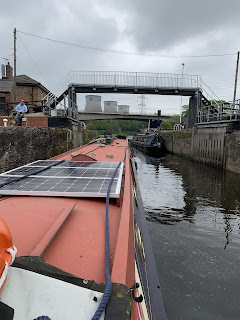 Liana could not operate the lock, then saw other boaters at the other end of the lock! John tied up Annie while their small cruiser came through the huge lock. It was their first day cruising! The river level indicator was safe, in the green, and the water rise was about a foot only. 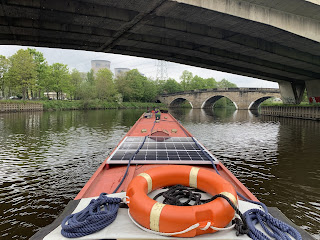 Another oncoming narrowboat crew kindly let Liana come aboard, so we set off under the bridges. 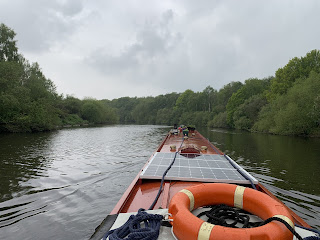 The Aire is surprisingly wooded, serpentine and scenic most of the miles to Castleford, where we came up eight feet at Bulholme Lock onto Castleford cut, which takes boats past the scenic weir which you see from the river bridge you must cross on your way into town from the visitor moorings. 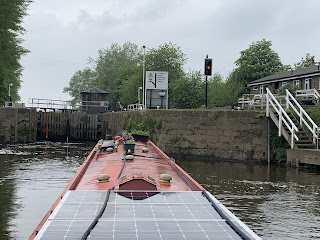 We quite enjoyed walking half a mile or so to the town centre shops and market stalls, noisy with Yorkshire folk,  “four sirloin steaks for a tenner!” 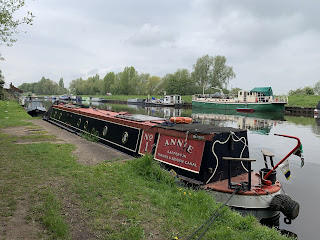 We reached Annie just before the torrential rain started, very luckily, and enjoyed the exciting FA Cup final, won by the underdogs Leicester City, home of two of our three daughters.

Posted by Narrowboat Annie at 20:21